Jeff Kashiwa: Back In the Day 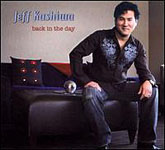 Few artists are true trailblazers; most others merely follow in their wake. On Back in the Day, Jeff Kashiwa follows the same contemporary and smooth jazz path taken by many technically competent, but minimally adventurous saxophonists.

That may sound like a negative criticism, but it's really not. There have always been jazz musicians whose metier lead them to being solid professionals instead of bold innovators. Back in the Day is the seventh solo album from the former—and sometimes guest—member of The Rippingtons, led by Russ Freeman, and Kashiwa hasn't wandered far from the formula of laying alto, tenor or soprano saxophone solos over standard R&B arrangements.

Fans of the sax stylings of Kenny G, Kim Waters and Richard Elliot will find lots to enjoy on this release. Far from fine cuisine, like a McDonald's large fries Kashiwa satisfies without being particularly adventurous. Deliberately prepared to appeal to mainstream tastes, the predictability is anything but moving, while Kashiwa's meticulous planning is grudgingly admirable.

Kashiwa isn't trying to create new standards. He's not the best tenor saxophonist out there, but neither is he the worst. As a result, Back In the Day isn't a bad album by any means, but it isn't essential listening.

When It Feels Good; You're the One; Creepin'; Free Flyer; Somethin' Real; Meet You There; The Attraction; Baby, Come Over; Back In the Day; Honesty.