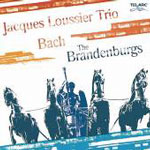 With his trio, pianist Jacques Loussier has interpreted classical works in a straight-ahead jazz setting for over four decades. He made quite an impression in 1960 with the Play Bach Trio and has never looked back. Newer trios have developed under his direction, letting the practice of reinterpreting classical music in a jazz vein grow prolifically.

The music of J.S. Bach has much in common with modern jazz. There's considerable freedom, changes in mood and tempo, and a driving force. The spirit runs free. For the most part, the Brandenburgs offer light and carefree melodies with embellished, lingering phrases. J.S. Bach composed the six concerti for the Margrave of Brandenburg between 1708 and 1720. The central piece, "Concerto No. 5, was written for flute, violin and harpsichord. Loussier has always felt that it made the best fit for his jazz trio.

Piano, bass and drums negotiate the allegro passages of each concerto with ease and express ideas naturally with the slower portions. The piano's clarity remains the album's focus, as Loussier drives note for note what Bach laid down. When the trio improvises, those crystal-clear piano lines remain intact as the artists weave alternate ideas around each theme.

While the music seldom swings, it does provide a fairly enjoyable rhythmic stride in its interpretation. "Concerto No. 5 serves as the session's high point. The other concerti lack the emotional feeling that this one provides.

Loussier and his trio tackle "No. 5 with authority. Not by coincidence, it's also the longest of the concerto interpretations. With this favorite member of the Brandenburgs, we get plenty of swing, animated rhythmic action, a slow ballad middle movement, and a highly dynamic emotional environment. Loussier's interpretation closes with a hot allegro movement that sums up what he feels about keeping music such as this alive and well. Bach's music still holds many surprises, and Loussier's swinging trio is able to bring it into the 21st Century with determined clarity.