Bach: Music In The Castle Of Heaven by Sir John Eliot Gardiner 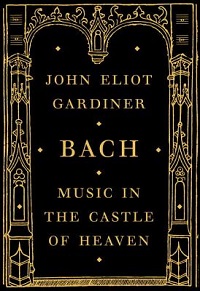 There are a dozen reasons why Bach: Music In The Castle Of Heaven is an important addition to the J.S. Bach bibliography, several being associated with its author, Sir John Eliot Gardiner. Gardiner is the dean of the college of Bach Choral specialists, a college containing names like Joshua Rifkin, Nikolaus Harnoncourt, Philippe Herreweghe, Ton Koopman, Masaaki Suzuki, and Helmuth Rilling. What separates Gardiner from the rest of the Bach pack is his Bach Cantata Pilgrimage (BCP), a project he initiated at the turn of the millennium celebrating the 250th anniversary of the composer's death.

Gardiner is not the first conductor to record Bach's complete church cantatas. Pieter Jan Leusink, Helmuth Rilling and most recently Masaaki Suzuki have previously (or contemporaneously) committed all of the sacred cantatas to digital. But it was only Gardiner who navigated the physical and musical logistics, and largely in 2000, performed and recorded, in the proper liturgical order, Bach's entire surviving cantata corpus— almost 200 works total—in various Abbeys, Cathedrals, churches and chapels throughout Europe and beyond.

Beginning on Christmas Day 1999 in Weimar's Herderkirche, and concluding in St. Bartholomew's Church, New York on 31st December 2000, Gardiner and his Monteverdi Choir and the English Baroque Soloists recorded what would eventually become the BCP that visited fifteen countries with ninety concerts given. These concerts were poured into the 27 volumes of the Cantatas released between May 10, 2005 (Volume 1) and April 8, 2008 (Volume 27), with a single box set made available October 29, 2013.

Gardiner, who was a singer and choirmaster like Bach himself, has spent a lifetime with the Master's choral and vocal music and is therefore more than qualified to place a book into the Bach biographical library, which until recently has been as static as the Biblical Canon as far as innovation and research are concerned. Gardiner skillfully used a variety of biographical methods in fleshing out his picture of Bach. First, Gardiner is acutely aware of all Bach scholarship to date. He takes full advantage of the most recent scholarship in building his picture of Bach, one a bit different than that of the past. Second, Gardiner re-covers some older ground by doing the "laundry receipt" checking of recorded facts contemporary with Bach (and those crafty Germans left nothing unwritten). From this, Gardiner returns to and re-evaluates Bach's poor attendance record in primary school, once attributed to the composer's questionable childhood health, and now proposed to have been a conscious effort to protect the child Bach from what can only be considered the draconian environment of Lutheran parochial education. Add to this that Bach was of meager means (and an orphan), as were his classmates, and there can be found some credence to Bach's being a bit of a hellion at the time.

Gardiner, like Stanley Crouch in the first volume of his biography of saxophonist and composer Charlie Parker, Kansas City Lightning: The Rise and Times of Charlie Parker (Harper, 2013), spends ample time researching the environment in which Bach grew up. He does this at the tactile European level, delving all the way to Bach's Eisenach, Saxe-Eisenach, State of Thuringia, in the center of what is now Germany. Gardiner details the economic and cultural norms of the period, as well as those affecting Bach directly in school. Much attention is afforded Bach's rearing at the hands of this older brother Johann Christoph, his musical tutelage and Lutheran discipline, both of which affected Bach profoundly.

Next, Gardiner introduces what he calls "The Class of '85." That would be 1685, a year that saw the birth of Bach and two other Baroque titans in Domenico Scarlatti (1685-1757) and George Frideric Handel (1685- 1759). The author expands this list with the slightly older Jean-Philippe Rameau (1683-1764), Johann Mattheson (1681-1764) and Georg Philipp Telemann (1681-1767) and discusses the artistic and cultural aspects of each artist, both as composers and performers. Interwoven in this discussion are the different styles of "serious" vocal music with a good bit of time spent of Claudio Monteverdi () and the birth of opera presented alongside the evolution of liturgical and choral music and the parts Handel played in the former and Bach in the latter. Gardiner's careful approach does much to illuminate the musical environment these artists inhabited.

The remainder of the biography address the mechanics of Bach's Lutheran faith and his work ethic in the production of his choral works. If Gardiner may be taken to task for anything, it is that he does not address Bach instrumental music at all. A valid point, but Gardiner does not approach Bach from an instrumental direction. Gardiner writes from where he knows, and in that "where" Gardiner is secure in being an authority. Gardiner's writing style is erudite and accessible and not overly technical. He does not spare the reader his impressive vocabulary and reading Bach: Music In The Castle Of Heaven on a Kindle (with ready access to its dictionary and Wikipedia) is a plus. While not comprehensive, Gardiner's carefully wrought biography is comprehensive of Bach choral works and not likely to be improved on in the near future.