By BUDD KOPMAN
September 23, 2008
Sign in to view read count 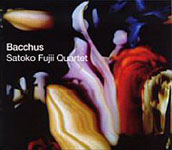 The jazz of today is the most vibrant ever. It has shaken off the straitjacket of "jazz as style," replacing it with the concept of "jazz as an attitude or aesthetic." Paradoxically, the music produced by the players embracing this concept is called avant-garde; primarily because it cannot be immediately pigeonholed and is inherently challenging. In truth, however, jazz has always been a moving target, and has always challenged those who choose to remain comfortable.

Pianist Satoko Fujii must be considered as a member of the elite group of composer/players in the jazz world today. Possessing enormous energy and a restless intellect, jazz of the highest quality and of all genres seems to pour out of her. Fujii creates many different groups, each embodying specific sonic and compositional goals, with the exceptional Bacchus coming from her Japanese rock quartet.

The group has put out four other albums, all named after Greco-Roman gods: Vulcan (Libra, 2001), Minerva (Libra, 2002), Zephyros (Not Two, 2003) and Angelona (Libra, 2005). Each explores sounds and emotions emanating from the rock viewpoint, which is embodied by the very heavy and yet responsive rhythm section of electric bassist Takeharu Hayakawa and drummer Tatsuya Yoshida.

Indeed, Fujii has noted that she used to use the same charts for both this quartet and her other one consisting of Tamura, bassist Mark Dresser and drummer Jim Black, getting different sounds from the differing player's styles. More and more, however, she is writing differently for each group, with this band being more structured and groove oriented.

Despite the many groups and changing instrumentation, Fujii's music remains instantly recognizable because of her ability to integrate sometimes extreme contrast, with fetching melodies, humor, hard-driving energy and constant surprise within structures that have an audible logic.

Bacchus, relative to the previous four releases, is a bit on the lighter side, but is just as intense and engrossing. A number of tunes have titles that accurately describe the music. "Flying Elephant," the longest track, opens with a melody that conveys a clear sense of graceful (grey) heft, before giving way to a terrific drum solo by Yoshida and softer, more introspective duo section between Tamura and Fujii. "Waltz For Godzilla" is hardly a standard 3/4 waltz, but then again neither is the dancer.

The two "Town" tracks sound related in their overall eeriness and bass lines, but with differing rhythms and clashing meters. The title tune is completely improvised, the result pure dynamite, while the two versions of "Natsu Mae" project pure power through precision.

Bacchus is music for the adventurous ear and mind, and it delivers many times over. Any listener coming to jazz from progressive rock has much in which to revel with this album as well as the four others.

Sunset in Savannah; In the Town Called Empty; Natsu Mae; Flying Elephant; Bacchus; In the Town You Don't See on the Map; Waltz for Godzilla; Natsu Mae (with effect).