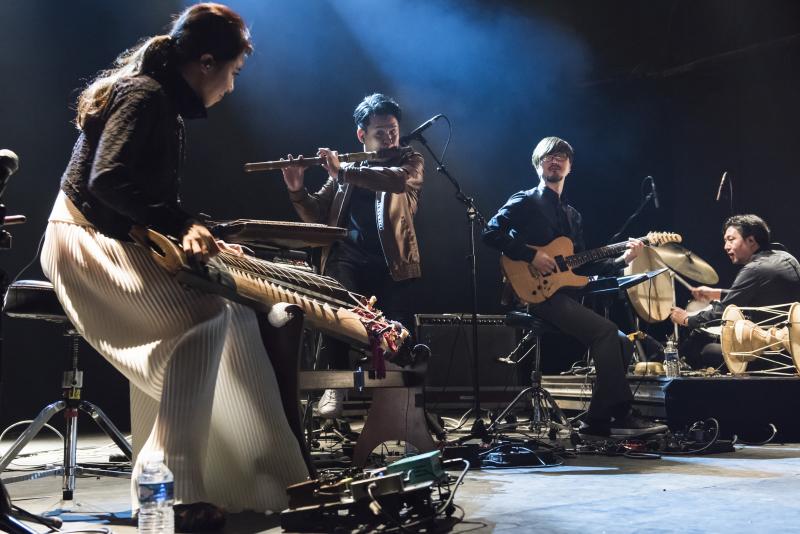 Babel Med Music is at once a public festival, a conference and a trade fare, possessing the capacity to be experienced on multiple levels, as the ratios of these aspects are juggled by the individual attendee. Its thrust is primarily towards global sounds, rootsy and ethnically-inclined, from purist into fusion, but mostly the latter. This year, there has been an attempt to include jazz as a strong ingredient, but out in the field this was not so apparent, both in quantity and inherent genre manifestations. Marseille makes an ideal home for the appreciation of global musics, being a major French port, and a nexus for the Afro-Mediterranean and beyond. To underline this, the daytime talks, panels and seminars, as well as the evening multi-stage showcase gigs, are housed on the dockside zone, within a short walking distance of each other. Not much else is around the Dock Des Suds venue's part of town in the evening, but it was easy to barfly in a corner old-man café, and then masticate merguez in-a-baguette, just up the street.

In the daytime, the many business stands, conference events, and a small number of afternoon music showcases, were situated in a huge hangar, accessible via a zig-zagging metal staircase, if the ascenseur was too slow in coming. The small live act stage programme contained a few gems, only caught by a smattering of these music- lovin,' music biz types. A particular highlight of this local-region platform was Nafas, a global-jazz trio featuring saxophonist Fred Pichot, bassist Sylvain Terminiello and drummer Ahmad Compaoré. Their sinuous parts spliced Afro-Arabic groove to free jazz abstraction, revolving around some notably pliable basslines, building up a genuine force of optimistic expression. No bland audience flattery was needed: they just delivered a set of consistent musical dynamism. The next afternoon, La Mossa, an all-female polyphonic group also delivered a compelling set, full of vocal exuberance, members taking turns to glide forward and lead off a particular song, or pick up a hand-drum to palpitate, all of them well-versed in theatricality as a means to enlarge their degree of communication.

For the hardcore music freak, untethered by business networking concerns, the evening multi-stage gigs in the Docks Des Suds venue provide the crucial core of this festival, with an abundant programme that is varied and imaginative, combining unfamiliar growers and established presences on the worldwide scene. All of the stages are housed in a sprawling venue, with an outdoor bar and restaurant run that featured a nightly dj scene. On the first evening, there were a few instances of the planned jazz content being derailed, for whatever reasons. You know when you're at a gig, and the only thing worse than the faint sussurus of chatter is the far louder snake-hisses made by the close-proximity complainers. Then, a third faction latched onto the absurdity of this, making their own exaggerated ssshhh-ing sounds. Unfortunately, this happened early in the Israeli New Yorker pianist Shai Maestro's set, making a concentration on his admittedly mellow meanderings quite challenging. With multiple stages and staggered timings comes the problem of folks entering and leaving in a constant stream. Not a disadvantage for the majority of acts, but the occasional quiet band can suffer from this situation. Then, the Canadian (with Haitian parents) saxophonist Jowee Omicil turned in a disappointing set, too full of showbiz tricks, tepid funk grooves and endless party-calls to the crowd. The evening's pinnacle was scaled at midnight, when the French-Algerian Mehdi Haddad led Speed Caravan with his heavily electrified oud, subjecting North African music to heavy surf-rock and psychedelic augmentation. Where leopard-skin meets duct-tape, as his chosen axe-coverings, with buzzing spirals of rai fuzz coaxed out of his footpedal mountain, sounding like slide-howling, without the bottleneck, as he bends every single note into the heavens. Haddad sustained this energy level and soloing frenzy throughout his entire set, with no slippage whatsoever.

The second day was once again topped by its 'round midnight headliner set. The Algerian singer Rachid Taha has been quiet in recent years, and is now looking slightly dazed and bemused, ironically inhabiting a rai-rocking band terrain, but still burning at the heart of his band's fired-up forward momentum. Garbed in black glitter evening wear, voluminous tie, Mariachi strides and cocked gangster hat, Taha might have the beginnings of a George Melly look, but his snarling, post-Serge Gainsbourg delivery remains intact. Taha seems casually involved, but this is allowed when the band is a precision rocking machine, not least in the electro-oud department. At the opposite end of the atmosphere spectrum, the Estonian singer and fiddler Maarja Nuut evolves rapidly, as each gig is witnessed. Over the last two years, your scribe has seen her grow from a moderately acoustic folk purist to an increasingly electrified shape-bender of sound. Her acoustic sensitivity remains intact, but it's now cloaked in a light sprinkling of effects, loops and textures. Lately, she's started to work with laptopper Hendrik Kaljujärv, freeing herself up to concentrate on singing during several of the set's pieces. Sometimes it's difficult to disentangle the electronic parts provided by this pair, but Nuut remains responsible for most of her own vocal and violin layering, with some snappy footpedal dancing at play.

Early on the final evening, a spectacular discovery was made in the shape of Bandadriatica, from the Puglia province of Italy. Their method is precision partying, good-time music of massive complexity. They're well capable of acting drunkenly, but with musicianly mastery remaining intact. Speed and dexterity are paramount, and if dancing erupts amongst the crowd, it requires a commitment to fast footwork, as the horn section (clarinet, saxophone, trumpet, trombone) are perfectly capable of issuing fast-writhing lines whilst jumping around in lunatic fashion. Their frontman singer/accordionist Claudio Prima plays a significant part in goading all into the big top tomfoolery, speed-gypsy fray. Following immediately, the set by singer Hawa Boussim was disappointing. From Burkina Faso, and with a large band in tow, her voice possessed a harsh tonality that wasn't altogether pleasant, her abilities not quite up to fronting such a powered band sound. The third night's high point was provided by the South Korean quartet Black String, on the smaller Cabaret stage. They've already been garnering attention via their album on the ACT label, the compositions inhabiting their own ground, primarily sounding like traditional Korean folk music, but delivered with a powerful rock-jazz-improvisation vocabulary. Space is employed as a meditational prelude to outbreaks of angular, hard-bodied propulsion, with Yoon Jeong Heo's ancient geomungo (the Korean equivalent to the Japanese koto) gnashing against the modern guitar-electronics of Jean Oh. Heo's vigorous strumming, lashing and striking of her strings comes as a shock, when following straight after a calmer, more expected rumination. Black String's fast-trigger rapport is immediately striking, with their broad palette facilitating a musical journey that captivates with tension throughout, even if that's a tension arising out of placid depths, just waiting patiently for the next forceful sprint.