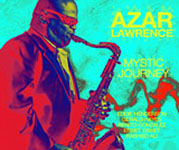 So rapid an ascent to the peak of the jazz world may, at times, have led Lawrence to wonder how he could be playing with these giants. But teaching and instilling confidence in youth is the role of the elders in any true community, and so one day Tyner reassured Lawrence: he told the young man that he belonged in such company because he could not only play the hell out of the horn, but because he "felt the same way about the music as John (Coltrane) did."

In 2010, some 30 years after he last took his own jazz band into the studio, Lawrence is making up for lost time. He announced his return with Speak The Word (Zarman Productions, 2008), his first studio recording as a leader since 1976. Next, he offered his profoundly felt thanks to those spirits who came before him with Prayer To My Ancestors (Furthermore Recordings, 2009). Now, Mystic Journey finds Lawrence looking back to the future, as he reunites with several old friends while simultaneously moving forward with the addition of two members of his current East Coast band.

Deserving of special mention is the illustrious, Philadelphia-born drummer Rashied Ali, who passed away not long after the completion of this recording. Ali, known primarily as a free jazz player from his collaborations with saxophonist John Coltrane during the mid 1960s, reveals just how hard he can swing as he propels the band with fiery rhythms.

Joining Lawrence in the horn section are two more old friends—trumpeter Dr. Eddie Henderson, who brings his vibrant and explosive sound to the recording, and alto saxophonist Gerald Hayes, brother of jazz drummer Louis Hayes, who Lawrence first met while still in High School in Los Angeles. Their relationship bore fruit when Hayes, on flute, performed on Lawrence's Summer Solstice, 35 years ago.

Lawrence's connection with the rest of the rhythm section may be of a more recent vintage, yet musically, it is just as intimate and potent. He first heard and played with Benito Gonzalez, the young and ascendant Venezuelan pianist, when he jammed with him a few years ago at a Kenny Garrett gig in Los Angeles. Months later, the two met again in New York and Gonzalez came aboard for Lawrence's East Coast gigs. In addition to his fiery piano work, Gonzalez's horn arrangements prove invaluable to the session, to which he also brought three tunes. Finally, Essiet Essiet, an in-demand bassist on the New York jazz scene, joined up with Lawrence and, like Gonzalez, has become a regular member of his quartet.

Mystic Journey opens with the title tune, a Lawrence original. Playing ferocious tenor from the first note, the saxophonist establishes the recording's hard-driving, riveting intensity. Ali, holding nothing back, drives the band like a train conductor high ballin' it out of the yard. Gonzalez's thick chords and pulsating rhythms reveal a distinctly Tyneresque influence on the music.

Gonzalez also adds a little Latin flavor to "Summer Solstice," the title tune from Lawrence's second recording. After a brief bass intro, the horns enter, stating the melody in unison and delivering that big sextet sound. In this solar celebration, all the horns solo. Lawrence leads the way, again on tenor, while Henderson paints his solo with the brighter hues of his musical palette. Altoist Hayes, playing with burning passion and invention, amplifies the tune's upbeat spirit. All the while, the rhythm section is swinging its collective butt off.

Lawrence plays soprano on Gonzalez's "Quest," the instrument's exotic sound perfectly suited to evoke the mystery and enchantment of this spiritual exploration. Henderson, on flugelhorn, blows gentle, playful tones suggesting these weary travelers may, at last, have found respite in a desert oasis. Paying tribute to John Coltrane's influence on his musical development, Lawrence—back on tenor and with just the rhythm section—blows warm, lush tones on Jimmy McHugh's ballad, "Say It Over And Over," recorded so memorably by Coltrane on Ballads (Impulse!, 1962).

The band gets to really stretch out on McCoy Tyner's "Walk Spirit, Talk Spirit," a modal classic Lawrence often performed as a member of the pianist's band. Ali's "Adrees" surprises with a waltz tempo, though it swings harder than any tune penned by the waltz king, Johann Strauss. The CD closes with "Starting Point," another burning, straight-ahead tune by Gonzalez. The pianist's insistent line opens the tune, answered in unison by the horns before Lawrence comes roaring in triumphantly on tenor. Henderson— confident, precise and hip as ever—takes the next solo. Gonzalez dances his fingers over the ivories, Essiet plucks the bass strings relentlessly and Ali cooks, before the horns return to take the tune out.

The return of Azar Lawrence to the mainstream jazz scene is one of the most gratifying developments in recent jazz history. His rededication to his musical gift, evidenced by the seven- hour days he apparently devotes to practicing scales and playing long tones, has not only allowed him to resume the journey towards his destiny, it has given the jazz world what, in a way, is a "new" master of the saxophone. His compelling sound and volcanic performance, so poignantly captured on Mystic Journey, reveals an artist at the peak of his musical powers.