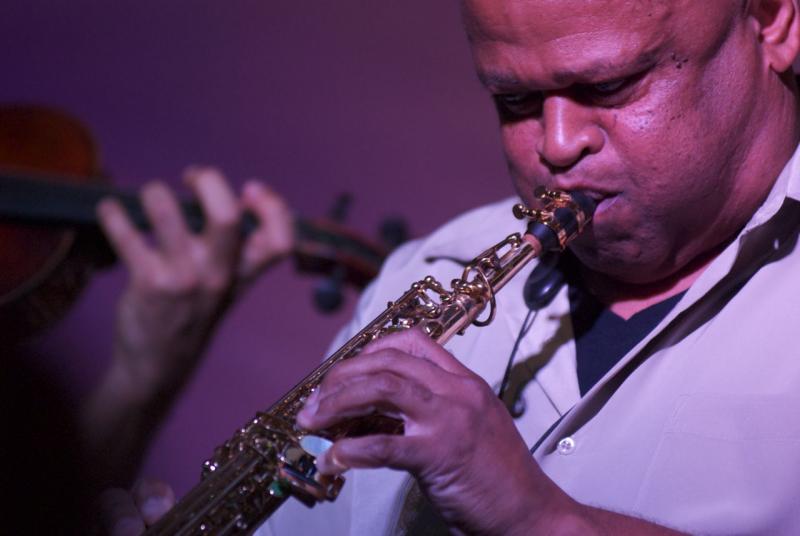 The "A Train," saxophonist Azar Lawrence, recently roared into the Seabird Lounge in Long Beach, CA with a burnin' quintet guaranteed to generate a lot of steam power. Lawrence, a native Angeleno, first impacted the jazz scene back in the early '70s while playing with jazz legends Elvin Jones, McCoy Tyner and Miles Davis. But after a prolonged hiatus from the jazz scene, Lawrence has paid his dues, again. Gigging at mostly lower profile, local Southern California clubs for several years, he now spends more and more time in NYC (the jazz Mecca) and on the road, performing at top venues around the US, Canada and Europe. Lawrence's two highly acclaimed contemporary CDs, Prayer For My Ancestors ( Furthermore, 2008) and Mystic Journey (Furthermore, 2009) heralded the return of a real tenor titan to the jazz limelight and has Lawrence primed to regain a prominent place among today's top horn players.

Lawrence opened the musical proceedings with "The Seeker," the title tune from his soon-to-be-released live CD recorded last winter at New York's Jazz Standard. At first, a gentle rumbling escaped from the deep end of Theo Saunders' piano. The heart-like throbbing of Henry Franklin's double bass and the dirge-like pounding of Alphonse Mouzon's bass drum enhanced the sonic solemnity of the moment.

Shimmering cymbals signaled the entrance for Lawrence's exotic soprano sax. Patiently yet inexorably, Lawrence built his solo, ratcheting up the musical tension like an archer drawing back his trusty bow to the breaking point, embarking on a raging torrent of notes before yielding to the music's ultimate and welcome release. The smoldering volcano known as Miguel Atwood Ferguson, whose already impressive resumé has captured the attention of more and more admirers, next took his turn, attacking his viola like a madly ecstatic, whirling dervish.

Shifting gears, Lawrence then wrapped his warm tenor sound around the notes of Frank Loesser and Jimmy McHugh's romantic ballad, "Say It Over and Over." The tune, famously recorded by Lawrence's prime musical inspiration, John Coltrane, on Ballads (Impulse, 1962), revealed both the softer side of Lawrence's typically manic musical personality, as well as his ongoing tribute to the vital role of Coltrane's music in his own recent musical and personal resurgence. Exchanging his sticks for brushes, Mouzon similarly harnessed his usually aggressive percussive approach for an emotionally cooler, yet no less vibrant, driving sound.

While eminently capable of expressing honeyed tones through his horns, Lawrence becomes a man possessed when blowin' an up-tempo burner. He did just that when the band slipped into a great jazz jam, the McCoy Tyner composition "Walk Spirit, Talk Spirit." The tune, intimately familiar to both Lawrence and Mouzon who famously joined Tyner in its Montreaux Jazz Festival performance on the live recording Enlightenment (Milestone, 1973), gave each member of the band a chance to stretch out.

In fact, as Lawrence informed the crowd, it was Mouzon who recommended the sax prodigy (who was in Elvin Jones' band at the time) to Tyner when the band needed a reed player to replace Sonny Fortune. Fortune had been invited to join Miles Davis' electric fusion band at the very summit of the jazz world, and nobody refused an invitation from Davis. Interestingly, Lawrence would soon replace Fortune in Davis' band, just in time for the live recording of Dark Magus (Columbia, 1974) at Carnegie Hall.

Saunders' powerful, Tyneresque piano chords introduced the tune with Mouzon's riveting drum work quickly joining in to establish the driving rhythmic mood before the coming explosion. Lawrence then strode up to the microphone, stating the haunting melody with deceptive restraint before the irresistible power within took over. Chorus after chorus poured forth from his tenor, igniting the rhythm section and mesmerizing the enthusiastic audience. Horn held high, moving up and down and back and forth as if in prayer, Lawrence blew pure, unadulterated tenor madness, eliciting shouts of delight and encouragement from the audience.

Mouzon brought the power and energy to the drums that this music demands, yet, in his solo, he also demonstrated a master's skills by varying the pace, intensity and textures of the percussion sound. And when the Skipper dug dexterously and passionately into his bass solo, the Seabird's jazz patrons showed off their sophistication and respect for the music, listening attentively to the bassist's private explorations. The band cooked on this raucous jam for nearly 25 minutes, the rhythm section producing a relentless energy and Lawrence and Atwood-Ferguson searing the air with their emotional outpourings.

After playing nearly 4 hours, the band finally sounded their last notes and the audience breathed a collective sigh. Lawrence, the conductor on this journey, punched the tickets of these jazz-lovin' Southlanders in Long Beach for a ride on the terrestrial "A Train," yet, by evening's end, the exhilarated passengers deplaned from the celestial Mothership in jazz heaven. New Yorkers can look forward to their own mystic journey aboard the "A Train" in October when Lawrence performs at Dizzy's Club Coca Cola as part of a John Coltrane celebration.