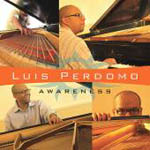 Awareness is a resolute work of progressive jazz by one of today's emerging pianists, Luis Perdomo. The Venezuela native has memorably contributed to recordings of bright jazz names like Ravi Coltrane (In Flux, Savoy, 2005), Miguel Zenon (Jibaro, Marsalis Music, 2005) and Dafnis Prieto (About The Monks, ZOHO, 2005).

Where his 2005 debut Focus Point (also on RKM) was more of an introduction, this recording is a dynamic view of original pieces that are more distinct and free, in a primarily trio setting with bandmates bassist Hans Galwischnig and drummer Eric McPherson. The vibrancy of the music and the sheer strength of the performances are more open and stylized, giving a further glimpse into Perdomo's cerebral concepts, which include influences from Afro-Latin, European classical and jazz music.

The surprise is that Perdomo now makes creative use of two bassists and two drummers simultaneously on half of the pieces, with the addition of drummer Nasheet Waits (a member of pianist Jason Moran's Bandwagon) and master bassist statesman Henry Grimes (who has recorded with Don Cherry and Sonny Rollins). The idea of a double trio with one pianist may not be entirely new, but within this context, it works wonders by giving the music a layered and dense feel that is open to possibilities but never congested.

Something special happens when the dual walking bass lines and contrasting drum sections lay out support for Perdomo while he solos fiercely on the opening piece, "Street View: Biker. The music is melodic, aggressive, with traces of free jazz and plenty of interaction from everyone. "Ishtar flows with a rubato-like cadence, featuring Perdomo laying down beautifully twisting playing; the exhilarating rhythm section work on "Polrais involves Galwischnig and McPherson's precise timekeeping, as well as blistering solos.

The strange beauty of the abstract "The Song of the Forgotten comes with Grimes and Galwischnig delivering dual arco solos as the twin drums shower the piece with percussion. You can take an adventurous trip on "Tribal Dance as the double trio plays with both chaos and control, culminating in a twin drum solo from McPherson and Waits. Just when you thought piano trio recordings were sluggish and predictable, along comes Awareness. Highly recommended.