Steve Lacy: Avignon and After - 1 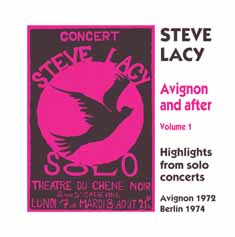 Emanem and Steve Lacy have been entwined since the label was born with the release of the saxophonist's LP Solo (1974). The first eight tracks of this CD hold the contents of that album, recorded at two August, 1972 concerts in Avignon—significantly, Lacy's very first solo concerts. Ever since, the label has championed the music of Lacy with several landmark releases. This CD and its companion, The Sun (2012), are prime examples. Together, this pair of albums replaces the 1995 Emanem release, Weal and Woe, repackaging all of the music therein with many previously unreleased tracks.

The Avignon tracks—the original eight plus four additional short items—are solo Lacy at his best. The briefest snippet of any of them instantly identifies the player as Lacy, so distinctive are his tone and phrasing. The music combines his trademark melodic themes with soaring flights of fancy. There are also instances of experimentation, as on "Stations" and "Cloudy" where he uses a small radio, on the former, to find background music to improvise along with or, on the latter, to provide static. As always, an irresistible sense of logic and "rightness" runs through everything Lacy does, even when he breaks the rules or ignores them completely. On "Stations," the radio is playing Brahms songs while Lacy improvises a melody that bears no relation to them. He somehow eventually evolves this into the theme from Bernstein and Sondheim's "I Feel Pretty" before moving on. Of course, it all works beautifully.

The "after" part of the album title refers to five pieces recorded in Berlin in April, 1974. These five tracks are all part of Lacy's "Clangs" cycle, which he later recorded in a duo with Andrea Centazzo, and then again with a double sextet. As is often the case, these solo versions better those with more musicians, with Lacy giving us the unadorned essence of each one. Across the five, we hear very different facets of Lacy's playing, but the pieces all fit together into a coherent whole that remains unmistakably Lacy.

The best news is that Lacy was back in Avignon a few months later playing another solo concert, meaning there is enough material for another volume of Avignon and After. Hooray! Lacy lives.