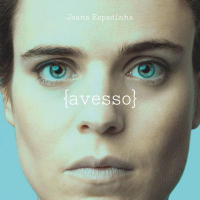 Avesso is Portuguese for "inside out." It is also used unkindly to imply that someone is a mess. Singer/songwriter Joana Espadinha sees it differently. "For me avesso is vulnerability and truth. I see it as the moment after a storm or a war when everything is clear and you can find peace."

She gazes earnestly from the cover of her debut album, blue eyes wide open, as if laying her very soul on the line. The title song is not billed but crops up as what she calls a "hidden track," right at the end and after a long pause.

The standout track—clearly displayed—is the ironic "Ao Seu Dispor (At Your Disposal)." Espadinha wrote this after searching in vain for something interesting on television. "I was thinking about how hard it is to find something real, and how dangerous it is for society to be entertained all the time," she says, then adds sadly, "It's about human solitude." It's also extremely catchy and seems set to become a Portuguese hit.

Though Espadinha, a former law student, would seem to have little interest in commercial success. Naming Joni Mitchell as a major influence, she says: "She never compromised her artistic integrity to suit a producer or sell records."

This album is not jazz in the strict sense of the word (if there is such a thing) but is often jazz-y, with some fine Lisbon musicians involved. "Desengano (literally, Unmistake)" features a probing saxophone solo by Desidério Lazaro and "Phoenix" some fine lyrical trumpet by Moisés Fernandez.

There's a definite retro feel to many of the numbers, emphasized by occasional dashes of psychedelia and Beatles-type musical effects. "Petrified" is perhaps best of the English language songs, though the "recitation" at the end palls on repeated playing.

In "Branco (White)," one of her early songs, Espadinha sings of "someone who is so full of fear that she can't see beyond herself." Based on the evidence of this album, she's well past that. Add a little more confidence to the mix and she'll be a force to be reckoned with on the world stage.