By EDWARD BLANCO
February 27, 2017
Sign in to view read count 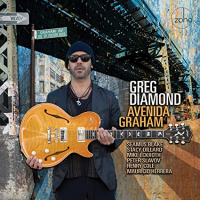 Brooklyn-based jazz guitarist Greg Diamond issues his most culturally diverse musical mosaic on Avenida Graham reflecting a blend of jazz and the Latin sound that has been an influential part of his life. Being half Eastern European Jewish and half Colombian, Diamond long ago learned to appreciate the Latin sounds listening to the music of Hector Lavoe and Willie Colon as he immersed himself in the jazz idiom later on. Living near Graham Avenue (aka Avenue of Puerto Rico) and Broadway for over a decade, this album is a reflection of the places, cultural and musical landscape that remain a strong influence in his life and work today.

One big asset this recording has going for it is, the A-list of players the guitarist assembles to document his music. Miguel Zenon's drummer Henry Cole and John Scofield's pianist Mike Eckroth along with bassist Peter Slavov, form the core rhythm section quartet providing the fuel to this musical engine. Diamond elevates the tone and texture of the music by adding jazz luminary Stacy Dillard on the tenor and soprano saxophone on five tracks with tenor saxophone great Seamus Blake on "Rastros" and "El Coronel" along with percussionist extraordinaire Mauricio Herrera rounding out the cast on four pieces.

There are no short pieces here with the starter "Synethesia" providing almost eight-minutes of percussive percolating grooves featuring Dillard on soprano, Herrera and Cole pounding out the beats and the leader unfurling lightning solos of his own. "Rastros" opens up in tender fashion with the guitarist delivering soft fingerplay on the strings against the backdrop of Blake's humble tenor phrases in a warm ballad of which Diamonds states is, "One of my favorite tunes of the record." One of the centerpieces of the album has to be the up tempo, fast-paced Latin-styled "El Coronel" and homage to a character from a novel by Colombian author Gabriel Garcia Marquez.

Diamond's writing provides many moments of musical magic throughout the recording such as a solemn guitar solo on the introduction to "Hint of Jasmin," the introspective haunting sounds of "Laia," the melodic and uplifting "Cascade" and the complex tempo-changing "Motion Suite" the guitarist's most ambitious work taking two years to complete.

Perhaps guitarist Greg Diamond's most creative and complete recording to date, Avenida Graham is a musically-enriching work of art containing excellent original material performed by a world-class group of musicians. A talented writer and gifted player, Diamond exhibits all of these traits and more leaving it all on Graha