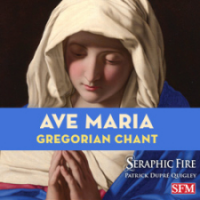 The mid-1990s witness a renewed interest in Gregorian Chant with the release, twenty years after its recording, of Chant (Angel, 1973/1994) by the Benedictine Monks of Santo Domingo de Silos. The public greeted this music, much between 500 and 1500 years old, as the greatest thing since the Edison cylinder. Early Music practitioners each released their own chant recordings. Oddly, this first recording remains uniformly fine and a very good example of the Benedictine order of prayer.

Seraphic Fire's Ave Maria: Gregorian Chant might be a bit of a red herring title as the vast majority of the music was composed after the traditional Gregorian Chants. No matter, a brief reading of director Patrick Dupre Quigley's liner notes reveals a very narrow and well-considered assemblage of pieces from the earliest chants to the 17th Century. The Ave Maria portion of the title identifies this as a collection of Marian adoration, specifically four antiphons (call and response chants honoring the Blessed Virgin, typically sung late in the day of the Divine Office, usually compline.

Quigley coaxes a rich, neutral sound from his sixteen singers of early music as finely as imagined. Recorded in All Saints Episcopal Church in Ft. Lauderdale, Florida, the sound is resonant without being too warm. A little chill befits this ancient music. This release could have been well-included in Christmas seasonal music reviews.