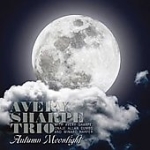 The Avery Sharpe Trio makes a sharp dressed brand of jazz. At once intelligent and immediate, the eleven songs that make up Autumn Moonlight are splendid fuel for Sharpe's crack piano trio with exceptional pianist Onaje Allen Gumbs and drummer Winard Harper, who collectively raise the art of the trio to a level where the concert stage and bandstand are on an equal level. Isn't this egalitarian stance exactly what jazz is all about?

Sharpe is beautifully equal parts Oscar Pettiford and Ron Carter. He possesses the puckish harmony and insistent velocity of Pettiford and the modern lyricism and unique momentum of Carter. The former of these influences is illustrated on Sharpe's original opener, "Boston Baked Blues." This is not your standard 12-bar gut-bucket brand of blues. Instead it is a sophisticated evolution made not expense of swing but not regurgitated by 100 years of musical rote. A spoken Sharpe even has a bit of fun at the end of the piece.

James Taylor's "Fire and Rain" gets a better treatment than most popular tunes of the past 40 years in its jazz treatment. It also emphasizes Onaje Allen Gumbs as Gene Harris to Sharpe's "Ray Brown" in the pantheon of jazz trios. Gumbs represents a new class of pianists, one less influenced by Bill Evan's brand of impressionistic thought and more impacted by the concreteness of Cedar Walton and Mulgrew Miller and the spirituality of Eric Reed. The trio completely gels during this recital on Woody Shaw's "Organ Grinder."

Autumn Moonlight remains in the jazz mainstream where its appeal may be realized by the largest possible audience. It does take chances in exposing us to newer ideas such as the interface between acoustic jazz and modern (post-Frank Sinatra) popular music. Sharpe is a master bassist and composer, who like Johannes Brahms remained relatively conservative while forging carefully into new directions.