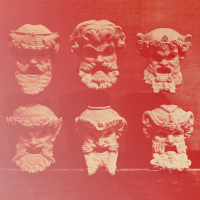 The Italian duo A Spirale, comprising electric guitarist Maurizio Argenziano and saxophonist Mario Gabola, was formed in 2002 when it also included drummer Massimo Spezzaferro; the trio version appeared on the ten-disc compilation Musica Improvvisa (die Schactel, 2010). Since then, Spezzaferro has not recorded with A Spirale, and the duo has collaborated with guest players. Autocannibilism is their first release since 2013, and finds them in the company of guest American percussionist Chris Cogburn, who has recorded with such esteemed players as Bonnie Jones, Henry Kaiser, Joëlle Léandre and Damon Smith. Recorded in November 2017, the improvised session that produced Autocannibalism's seven tracks took place in A Spirale's basement studio in Naples. Central to each of the tracks is the creative use of feedback. There is a fine dividing-line between disaster and success when playing with feedback; disaster can lead to dead silence if the feedback is lost altogether, or to the out-of-control screeching that is dreaded by musicians and audiences the world over; between those extremes lies a success zone in which the feedback is controlled by a musician who can creatively shape and play around with it (usually using a volume control or physical movement.) The entire process is reminiscent of tightrope walking; a performer can fall off on either side but is most engaging when not doing so, with the occasional wobble adding to the tension and excitement of their performance. When three players of different instruments are involved, playing with feedback becomes more complex than for one alone; the sounds made by one of them have the potential to destabilise those of the others. On the tracks here, none of which exceeds six minutes, the guitar and saxophone predominate, which is unsurprising as those instruments are often used to produce feedback, the former having a feedback history which dates back to The Beatles' "I Feel Fine" and to Jimi Hendrix, the latter owing much to the pioneering work of saxophonist John Butcher. For example, Argenziano's long, sustained notes are bent and sculpted to produce a wide variety of effects, while Gabola's amplified saxophone generates the characteristic popping and ringing sounds from the impact of the instrument's pads closing. On this evidence, both are adept at working with feedback on the edge of control; as part of their playing each is able to generate prolonged passages of singing feedback that tiptoe close to the dreaded screeching but never quite cross that line and unleash the beast; yes, both are accomplished, exciting tightrope walkers. (Of course, there may have been instances when they did cross the line, which ended up on the cutting-room floor; it is best not to know too much.) While Cogburn does not produce feedback as noticeable as that of his bandmates,' his use of percussion plus electronics provides subtle sounds that punctuate and complement theirs; the combination of the three is an undoubted success which makes enthralling listening and handsomely repays repeat visits. Autocannibalism deserves to stand as a landmark feedback recording.

Autocannibalism: The Ultrafeedback; Larsen is not a Tinnitus; E. Music and Cult of Virtual-Micro-Personality; Hai Voluto Il Rock Ora Tienilo Fino Alla Fine; Particepression; The Advent of Unreal Electric Kg and its Complacency; The Lemons of Carmela.