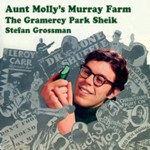 It's a well-known irony that if you were interested in playing traditional blues in the sixties, one of the best places you could be was overseas in England. Fed up with the Vietnam War, Stefan Grossman headed across the pond and began running around the town with the likes of Cream going to see new blues bands like Pink Floyd. Grossman got his traditional licks honestly from none other than his teacher the Rev. Reverend Gary Davis, and no doubt picked up some influence from earnest fingerpickers like Davey Graham while he was at it.

This CD reissue compiles Stefan Grossman's first two solo acoustic records (an earlier release was a band effort). Aunt Molly's Murray Farm was recorded in 1968 and The Gramercy Park Shiek followed a year later. Both show the enthusiasm and pluck of a guy who has found his vocation and wants to share it with the world, yet doesn't quite have the ideas or chops to match his dreams.

Aunt Molly's Murray Farm is filled with competent blues and rags that show a distinct Davis influence, whether they be done with a bottleneck or fingerpicked. All are admirable representations of the genre without being too spectacular; the tunes are fairly straightforward blues (albeit skillfully played) with pedestrian lyrics. It's apparent that Grossman is on to something, but hasn't quite figured out how to make it his own. Still, there's enough good music here to make this an album of interest, especially coupled with the next record he made.

For The Gramercy Park Shiek Grossman picked up a better guitar and better songs. All of a sudden Grossman shows up some influence from the traditional tunes of the island and, when couple with the folk leanings of his previous records, he starts to create some beautifully realized originals. The two songs in the middle, "Gentle Joys, Gentle Sorrows" and "Requiem For Patrick Kilroy," are filled with interesting little licks and novel melodies. Even "Crossed Eyed Blues" shows a little variation on the blues format, along with some better lyric writing.

It was clear at this point that Grossman was going to be a significant player on the acoustic guitar front, and that his best days were ahead of him. While not the best Grossman has to offer on record, these early efforts show an eagerness and ragged charm that makes many artists' first recordings a fun endeavor.