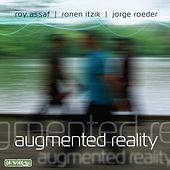 Collaborative trios are a tricky business. While all three members might set out to form an equal musical partnership, that rarely happens. Sometimes the instrumentation dictates the focal point, as with the fascinating group, Fly—drummer Jeff Ballard, bassist Larry Grenadier and tenor saxophonist Mark Turner—which is as democratic as they come, yet the horn draws the most attention by virtue of the general dynamic within a horn-bass-drums trio. This isn't necessarily a good or bad thing, but it bears mentioning because no group of musicians, no matter how well-intentioned, will ever come across as 100% equals. No two snowflakes are the same, and no two—or three or four—musicians are likely to come across the same or share equal space and weight within a group. Sometimes, that makes the music all the more interesting, as with Augmented Reality.

This trio represents a meeting of Israel and Peru on the streets of New York, and the music embraces all of these geographic influences. Pianist Roy Assaf contributes five originals, along with arrangements of Benny Carter's "Only Trust Your Heart," Richie Beirach's "Leaving" and the Latin classic "Alfonsina Y El Mar," and his work often bears the imprint of his Israeli roots. Drummer Ronen Itzik—also a native Israeli—is a bit more covert in his compositional references to his homeland, providing a different perspective on the Israeli-American Diaspora dynamic. The third side of this thrilling musical triangle—bassist Jorge Roeder—isn't represented at all through his writing, but he proves to be the most engaging soloist on the record, stealing plenty of space within the diverse compositions provided by his trio mates.

While the focal point may often shift toward Roeder's bass work, this threesome also clearly has a strong group dynamic and engages in serious, simultaneous interplay, as beautifully displayed on Assaf's "Ohel Israel." They cover swing ("Only Trust Your Heart" and "Dry Tear") and sensitive soul-searching ("Alfonsina Y El Mar") with ease, and thrive on the mournful Middle Eastern-laced music that's their birthright ("Morning Of Sorrow"). Itzik exhibits a flair for the dramatic when the band turns the volume up ("Sepharadic"), but he also colors the quieter numbers with sensitive cymbal sorcery. The band even goes well-beyond their roots with the album-opening "Tabacon," which deals in subtle tropical influences and features some exciting solo work from Assaf.

Whether or not Augmented Reality is a meeting of three true equals, that's beside the point. These three men form a cohesive unit based on mutual respect, shared ideals and conversational comfort within varied musical atmospheres, making Augmented Reality an engaging listen from beginning to end.