By TROY DOSTERT
November 8, 2018
Sign in to view read count 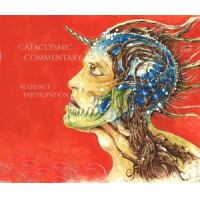 Tenor saxophonist Ben Cohen and pianist Eli Wallace represent the current generation of adventurous improvising artists, although their prior releases to date have taken very different approaches to their craft. Over the last couple years Wallace has released records with percussionist Rob Pumpelly under the name of Dialectical Imagination—The Angel and the Brute Sing Songs of Rapture (Atma Nadi, 2017) and The Angel and the Brute Sing Songs of Wrath (Atma Nadi, 2018)—both of which used composition as a vehicle for abstract, classically-influenced improvisation. Cohen, on the other hand, with his trio Viriditas has drawn from the more rootsy, tuneful tradition of Ornette Coleman's early music, joining with bassist Ross Gallagher and drummer Deric Dickens for a sound akin to Coleman's open and freewheeling, yet ultimately melodic, aesthetic. Here they're both going in a different direction altogether, teaming up with drummer Dave Miller for a much more unstructured, aggressive "comment" on the fractured political climate in which we live. The music does live up to its billing, even if the album suffers a bit from a lack of cohesion.

The trio invited fans and friends to come up with song titles in advance of the recording date, and with colorful choices like "Surprise Kitten Explosion 5000" or "Texas Chainsaw Focus Group," it's evident they had some fun with this assignment. With each title serving as a springboard for improvisation, one hears expected results, with the less wholesome titles leading to some of Cohen's most bombastic skronks and shrieks, and more benign ones like "Crowded in Solitude" or "Why Am I Not a Painter?" prompting less confrontational explorations.

There's no question that Cohen can bring the goods when it comes to the music's more extreme moments, as his banshee wail on "Surprise Kitten Explosion 5000" can make one's hair stand on end. Miller and Wallace also make for sympathetic partners, capable of matching Cohen's exuberance but taking a less histrionic approach on the more subdued tracks like "Nun Oil" or "Crowded in Solitude," which demand close listening and a more even-tempered delivery. However, the record is rather brief overall, with nine pieces coming in at around 35 minutes total, and with significant shifts in mood and technique from track-to-track, the album has the feel of a series of one-offs rather than an integrated whole. Which is not to say that the trio doesn't gel, as a piece like "Texas Chainsaw Focus Group" possesses enough fury to engage any jaded fan of free improvisation, with Cohen's acerbic tenor feeding maniacally off of Wallace's and Miller's pile-driving pummelings. But these moments work in isolation on the album.

Shortcomings aside, this is a record that suggests some serious potential for these three musicians in this configuration, so hopefully they will continue to channel their concept a bit more on their future releases. We'll stay tuned.