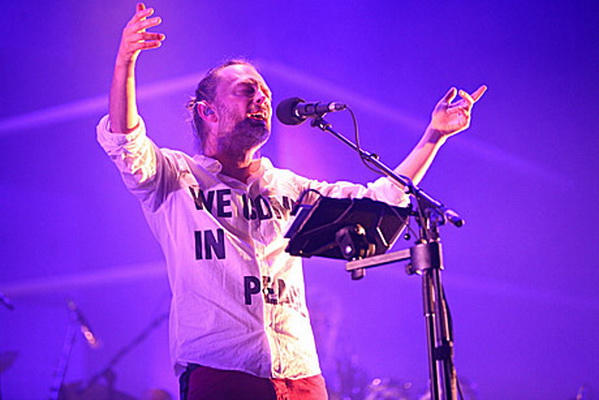 While the band's name may not mean a lot to people, Atoms for Peace certainly warrants that extra effort for people to check it out, particularly because it consists of members of some of the most popular bands today, such as Radiohead and Red Hot Chili Peppers. Fronted by Radiohead singer Thom Yorke, RHCP bassist Flea, Radiohead producer Nigel Goodrich, R.E.M. drummer Joey Waronker and singer David Byrne's percussionist, Mauro Refosco, this super group released its debut album earlier this year Amok (XL Recordings, 2013), and this summer is on its first proper tour, making a stop at the famed Exit Festival.

Atoms for Peace's music really cannot be described in traditional terms such as chords or riffs, but by binary numbers. It's glitchy electronic music with a plethora of micro-melodies, micro-twitchy beats, unusual textures, grooves and otherworldly harmonies, that in an awkward ways translated beautifully for the crowd of 25,000 in attendance. Intricately assembled and rhythmically complex, this was music situated in-between genres, where laptop science collides and coexists with Fela Kuti's Afrobeat influences and wild improvisations.

The band attracted the attention firstly by its each member's reputations, as naturally it is star-studded, but as the concert went on it locked the people's attention by its great musicianship and increasingly better songs in its set list. For most part, that list drew from the band's Amok as well as Yorke's solo record, The Eraser (XL Recordings, 2006), which were both produced by Goodrich. The show opened with "Before Your Eyes" and, over the course of the show, the group performed "Default," "The Clock," "Ingenue," "Stuck Together Pieces" and "And It Rained All Night." If the band's delicate creations can be called songs, Yorke's fragile and ghostly falsetto singing and keyboard playing—as well as his impassioned dancing, which brought a human dimension to the whole show, including Flea's freestyle bass dancing—drove the band's creations, which energized the audience as the set went deeper and deeper into the night.

The music achieved a filmic, almost epic quality, reminiscent of some sort of a soundtrack to a future noir. Delighted by the reception, the band gave two encores with plenty of songs such as "Feeling Pulled Apart By Horses," "Paperbag Writer" (by Radiohead), "Rabbit In Your Headlights" (Yorke's collaboration with band UNKLE), "Atoms for Peace" and "Black Swan."

Needless to say, the Atoms for Peace collective consists of extremely brilliant musicians and it was amazing to witness something this complex accepted and well-received by a mass crowd at the festival.