By EYAL HAREUVENI
September 24, 2005
Sign in to view read count 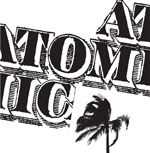 The Norwegian-Swedish quintet Atomic may be considered the Scandinavian equivalent of Chicago's Vandermark 5. Atomic's compositions, like Ken Vandermark's, are loaded with clever references to the history of modern and free jazz, and both groups' players know how to integrate these influences without losing their original voices. The architecture of the compositions is very tight, with well written and complex ensemble passages, but at the same time they are very fluid, flowing with exciting rhythmic energy.

But what best defines Atomic and the Vandermark 5 is that both groups are meant to play live on a regular basis. The new live three-disc collection The Bikini Tapes is the best testimony of Atomic's captivating abilities on stage. It's an ironic name—especially with the painting of a palm tree on the cover. The disc was recorded in cool Norway during seven concerts at the beginning and the end of Atomic's exhaustive 2004 European and American tour (which included a joint tour with Vandermark 5 that was chronicled in Atavistic's 2004 Flammable Material poster box set).

Broo blends Dixieland references into his playing on "Den Flyktiga Magneten"; borrows from mid-sixties Miles Davis on Ljungkvist's "Boom Boom"; and reflects Lester Bowie's flights of imagination on "Alla Dansar Samba Till Tyst Musik." Wiik pays tribute to the late Steve Lacy on his tender "Leave Stacy" and reflects on Lennie Tristano's West Coast Cool sounds on "Re-Lee." Ljungkvist is one of the best kept secrets of the European continent, a reed player who leans on Ornette's legacy during "Feet From Above"; or on the Coltrane quartet's sophisticated interplay during "Konards Hopp Om Livet"—but also borrows New Orleans themes on "Toner Fran Forr" and pays his respects to Jimmy Giuffre on "El Coto."

ADVERTISEMENT
His composition "Kerosene," originally from Nuclear Assembly Hall, is one of the most arresting ones in this set, revolving around the unison lines of Ljungkvist and Broo, stressed by the propulsive rhythm of the Norwegian rhythm section. Nilssen-Love's endless energy keeps pushing the group, but he knows how to spice his playing with surprising colorations. He and Flaten have turned into the new European brand of rhythm section, playing for such diverse groups such as Swedish reed player Mats Gustafsson's punk-jazz outfit The Thing, Finnish guitarist Raoul Bjorkenheim's metal-jazz Scorch trio, Vandermark's post bop School Days, and reed player Zim Ngqawana's South African-Norwegian group.

The Bikini Tapes feature many highlights. "Boom Boom," which ends disc one and three, features thunderous solos by Broo and Ljungkvist. It's contrasted by the elegant articulation of "Kerosene"; the sweet, bluesy version of "Pyramid Song," which Broo and Ljungkvist's beautiful, serpentine lines bring toward a restrained climax; and the catchy improvisations of "Alla Dansar Samba Till Tyst Musik." The Bikini Tapes is a true document of a working group at its peak form. Unfortunately, there are not many working bands in jazz today like Atomic (or, for that matter, Vandermark's various groups). Warmly recommended.