Electric Masada: At the Mountains of Madness

By KURT GOTTSCHALK
March 30, 2007
Sign in to view read count 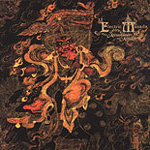 There's a reason that Masada has been around for some thirteen-and-a-half years (officially coming to—or at least nearing—an end with two concerts this month at New York's Jazz at Lincoln Center), one that Zorn has offered more than once: the band is just so much fun. Whether or not he likes the term, the quartet with Dave Douglas, Greg Cohen and Joey Baron has been Zorn's best outlet as a remarkable jazz saxophonist since News for Lulu. And the octet Electric Masada (whether or not he'd call them this) is a serious party band.

It's not clear if the retirement of Masada applies to the Masada String Trio and Electric Masada as well, if not the ongoing interpretations of the fat book of Masada themes from other performers. But it's also a safe bet that there is still spool upon spool of eminently releasable tape. But nevermind that. For the moment, we are left with the hollow, empty feeling of a notice on the Tzadik website. "John Zorn's Masada Quartet is officially breaking up. Read 'em and weep.

At the Mountains of Madness captures the electric outfit in their expansive glory: three percussionists (Baron, Cyro Baptista and Kenny Wollesen), electric guitar and bass (Marc Ribot and Trevor Dunn), keyboard and laptop (Jamie Saft and Ikue Mori), Zorn's sax the only horn and all playing to the hilt. Of the fifteen titles, six are played twice and only three didn't appear on 2004's Electric Masada: 50th Birthday Celebration Volume Four (Tzadik), but that doesn't matter, any more than it matters how many versions of Coltrane or Grateful Dead songs you have. Likewise, it doesn't matter that "Idalah-Abal, the intense, Black Sabbath-esque dirge that features some of Zorn's most ferocious playing here (how is it that that one isn't called "Metal Tov ?) is one of the ones repeated from the birthday party release.

The playing is fiery enough, generous enough, that it supersedes all such concerns. And if Electric Masada rages on after the quartet has been put to bed, so much the better. Someday we won't have them anymore either and we'll be glad to have these two and a half hours, recorded at the end of a European tour, beautifully packaged and barely able to be contained on disc.