The Treecreepers: At The Mill

By JOHN EYLES
December 5, 2006
Sign in to view read count 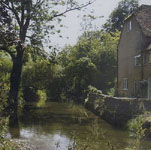 Ian R. Watson and Pete Flood—otherwise known as the Treecreepers—are regular performers on the London scene, and have played with a staggering array of different players in a range of styles. As the Treecreepers, they perform as an improvising duo and also, with guests such as Steve Beresford, Ashley Wales and Rhodri Davies, in the expanded Treecreepers big flock. At the Mill, their debut album, was recorded over a relaxed weekend in the tranquil rural surroundings of an old mill in Arlesford, Hampshire.

The keen-eyed amongst you will have spotted an avian theme to the album; nightjars, wrynecks, turnstones, whimbrels and godwits are all birds, as are treecreepers themselves, described by the RSPB as "making a thin high-pitched 'tsee, tsee' call, their song is a series of high notes with a flourish at the end. So there.

However, the pieces were given their titles after recording, so there is no suggestion of the music trying to imitate these birds' songs. Neither are there any samples of actual birdsong; unless my ears deceive me, the occasional sounds that do recall birds have been produced electronically. Indeed, the opening to "Kraw is highly reminiscent of Remmi Gassman & Oskar Sala's electronic bird sounds in Hitchcock's The Birds.

The five similarly titled pieces ("Kraw/Rauk/Auk/Aku/Kwar ) are all short, functioning as contrasting intervals between the longer (bird) pieces; they have a pleasing unity, and could actually all be different parts of one long piece. They are the nearest thing here to conventional improv, largely lacking melody or rhythmic percussion. If this was a meal, they'd be sorbets between courses to cleanse the palate.

Flood is an interesting and genuinely unpredictable improvising drummer; as often to be found playing folk as improv—he currently plays with the folk big band Bellowhead—he is just as likely to lay down a backbeat as an arrhythmic chatter. With him, there aren't any "no-go areas, and this imbues the music with freshness and vitality. Watson's trademark sound is a pure-toned, sustained vibratoless trumpet wail, a descendent of Miles.

In his playing Watson also demonstrates the benefits of space; he is not tempted to try and fill every gap; he knows when not to play. The most conventional of the tracks here, "Wryneck, displays all of these traits to good effect; Watson lays down a simple, melodic trumpet figure that is repeated and overlaid with subtle variations, while Flood adds an understated percussion accompaniment; taste and restraint abound throughout the piece, until the final minute when Flood lays down a driving rhythm that brings the piece to a climax.

The longest track, "Godwit —over fifteen minutes—starts with an opening fanfare from Watson that recurs throughout, backed by a funky beat from Flood that occasionally morphs into more complex, polyrhythmic playing; pleasingly, the track remains simple and focused and is not over-elaborated.

Inevitably, electronics play their role throughout the album—Watson used live electronics, while Flood applied them later ("posthumously )—but they are really the icing on an already very fine cake. The trumpet and percussion alone would be enough to recommend this music.