At The Jazz Band Ball: Sixty Years On The Jazz Scene 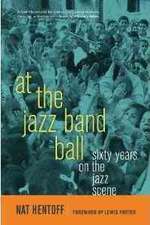 The photograph which adorns the jacket of Nat Hentoff's At the Jazz Band Ball: Sixty Years On The Jazz Scene—a collection of articles, interviews and reviews—couldn't be more appropriate. It depicts Louis Armstrong blowing his trumpet to the sky in an apparent state of rhapsody, surrounded by ecstatic kids from a medical center in Cairo, Egypt. The picture dates from 1961 and is a perfect illustration of the central themes in Hentoff's book—jazz as a universal, joyous language, jazz the healer and life force, and jazz as an educational force.

The majority of the articles collected in the book were originally published during the 2000s. An anomaly, at least time-wise, is a Downbeat piece from 1956, a revealing interview with pianist Thelonious Monk.

Hentoff is privileged to have known the likes of pianist Duke Ellington, saxophonists Charlie Parker and Lester Young, trumpeters Dizzy Gillespie and Miles Davis and singer Billie Holiday. Many of the musicians he writes about were his friends, and the intimacy with which they speak to him makes for absorbing reading. Monk says: "I've liked something about nearly every musician I've heard," and with regard to the notion that his tunes are somehow difficult to understand he replies: "Some of my pieces have melodies a nitwit can understand." Clarinetist Pee Wee Russell says: "You take each solo like it was the last one you were going to play in your life."

There's an illuminating nugget from Davis regarding latter day Holiday, and some advice from Ellington which seems ever so pertinent in this age of cross pollination of styles: "Never get caught up in categories," Ellington implores. Hentoff repeats these quotations, and others by saxophonist Ben Webster, drummer Art Blakey and trumpeter Clark Terry like a mantra, and one of Gillespie's reflections—"It's taken me all of my life to know what not to play"—appears eight times in the book. The reader certainly comes away with these pearls of wisdom firmly embedded in the brain.

Much of Hentoff's attention since 2000 has focused on the greats of the past. There is little space in the collection for jazz's modern practitioners and what Hentoff makes of them must therefore be a matter of speculation. There are a few portraits of modern jazz musicians such as saxophonist and clarinetist Anat Cohen and a couple of bright young prospects that excite Hentoff, but it is telling that singer Amanda Carr's father played in the bands of Woody Herman, Louis Prima and Herb Pomeroy, that trumpeter Theo Croker's grandfather was Doc Cheatham and that singer Catherine Russell's mother, Carline Ray, was bassist, pianist and singer in the International Sweethearts of Rhythm. Since a negative review of Bitches Brew (Columbia, 1969) cost him his friendship with Miles Davis, Hentoff's writing has reflected his personal tastes.

The articles are steeped in a century of American history. The reader is reminded of the significant role of jazz in the Civil Rights movement. The FBI's tracking of the movements of Louis Armstrong for years, and Hentoff too, may raise a few eyebrows. Women in jazz are given a fair amount of space, and two revealing anecdotes about pianist Cecil Taylor and saxophonist Ornette Coleman and the "searing fires of rejection" that both suffered at the hands of their peers raise questions about the intolerance that certainly existed on the jazz scene in the so-called "golden age" of jazz.

Hentoff's life-long dedication to the individualization of education in America is reflected in articles on jazz programs in schools and it is heartening to learn that at least some school children are being weaned on the music of saxophonist John Coltrane. Second-grade teacher Christine Passarella, of Holliswood School in Queens, says to Hentoff of Coltrane's music: "(It) tells children to be who they want to be, that it is OK to be different, it is OK to feel, and that we all need to be able to express who we are in our own way to find what writer and philosopher Joseph Campbell called 'following your bliss.'"

Hentoff has been following his bliss for more than 60 years. He remains optimistic about the future of jazz and the infectious nature of the music. Its power to inspire, heal and regenerate comes across vividly. Sixty Years At The Jazz Band Ball is a celebration of the music and its practitioners and challenges those who would read jazz the last rights.