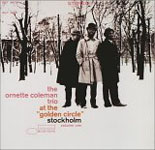 Maybe it was the supportive European crowd, largely acknowledged as a sympathetic bunch when it comes to American jazz, or the fact that innovator and iconoclast Ornette Coleman, after a two-year hiatus, was in full sprint at the end of 1965. Regardless of the extraneous factors, some of the alto saxophonist's most joyous and musically together moments can be heard among the 15 performances captured at the Golden Circle in Stockholm.

Breathing as one, Coleman's trio with bassist David Izenzon and drummer Charles Moffett manages to converse with a transformed sense of autonomy while simultaneously working within the boundaries of conventional swing.

Tracks like "The Riddle" and "Dee Dee" find Coleman speaking with a sense of unfettered abandon, churning out highly purposeful melodies with apparent ease. "Snowflakes and Sunshine" touts his boisterous and chaotic work on violin and trumpet, while also giving astute listeners some insight as to why guitarist Pat Metheny has called himself largely an "Ornette-styled player." As part of a reissue program remastered by the legendary Rudy Van Gelder, the two separate volumes encompass six previously unissued bonus tracks and deserve to be at the core of any inclusive Ornette Coleman collection.