Agrazing Maze: At The End Of The Day 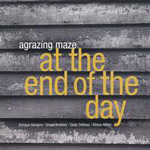 At The End Of The Day is a very fine effort by a core trio of piano, bass, and drums, augmented by trumpet on some tracks. What is immediately clear is that the trio is very tight and has developed a high degree of communication. Technically, pianist Enrique Haneine and drummer Allison Miller are first-rate, to say the least. I would include Carlo DeRosa also, but he is recorded a bit back in the mix and hence his contributions are not as obvious (but such is a bassist's lot in life, I suppose).

The tracks are all originals, except Wayne Shorter's "Nefertiti, and the connections between original and "cover are far from obvious. Stylistically, the group presents many faces, from the driving swing of "5 am Stroll to very free playing in "Gerber Blender.

A lot of the tunes involve constantly changing meters, which, unless you are a drummer, can be easy to miss. The only reason I can say this is that I asked for and got a lot of detail about the tracks from DeRosa. Much of the music has an unsettled quality whereby you can feel a pulse which is not really there, and where phrases are of odd lengths that make sense in an unusual way, a feeling of flux and change that makes for good listening.

This is not to say that this is "intellectual jazz, but there is a lot of complexity going on underneath that is hidden, but still present to add in a specific way to the mood of a particular track. The thinking isn't supposed to show, and only a group that has worked together closely can create this level of Art as artifice that is nonetheless emotionally accessible.

Hearing Agrazing Maze in a club would be an exciting experience, even if the group was doing a tour promoting At The End Of The Day, because there would be a good chance that not much would be played anything close to what is laid down here. The charts have been internalized and the group members have the real freedom to explore themselves within the framework they have erected. Their music, although fitting into today's esthetic, sounds entirely unique, and as such, is an achievement. This is album continues to reward the sensitive listener even after many listens, and it's easily recommended.

We Apologize For The Inconvenience; HB; Pent-Up House; Gerber Blender; At The End Of The Day; 5 AM Stroll; Nefertiti; Forotto; A Phrase.

Title: At The End Of The Day | Year Released: 2005 | Record Label: Foxhaven Records