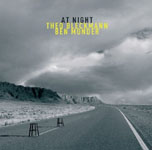 Theo Bleckmann (voice and live electronic processing) and Ben Monder (guitar) have played together in several settings. This time they return as a duo, with Satoshi Takeishi (drums, percussion and laptop) making a presence on five tracks.

There is a fine sense of balance on the recording. Both Monder and Bleckmann have a quirky sense of humor which is transmitted to their music. This is seen in the way they set up the instrumentation and bring in a new twist. They have their serious side manifested in the ethereal beauty that flows through the songs, which does not stop them from painting some black.

Bleckmann and Monder start on a quiet note with the stark "Late, By Myself." Monder has a wide palette on the guitar. Here it is the acoustic sound of single note runs, thick chords and a bass line that are precursors for Bleckmann's voice. He sings with clear enunciation, the song molded by the classical imploration of medieval times. It sparkles even when the tension rises and becomes taut.

Electronics and distortion of the instruments and a Spector like build-up mark "Norwegian Wood." Monder's rocking guitar is filtered through electronics. Bleckmann's singing is idiosyncratic as he loops and straightens the lines. It's a new high, framed by the psychedelic warp of time.

On "Swarm," Bleckmann goes into the Indian rhythm pattern, konakkol, complemented by Satoshi Takeishi on drums. The head belies the body for the ambit changes. It is now more sublime and calm floating on the imagination of the three. Sound is processed, filtered and stirred, the last by the fleeting accents of Takeishi. Intensity rides in, the guitar roiling, the drums enunciating rapid rolls and rim shots. Halfway through it's time to take another path and it comes in a descending calm. The two sides make a compact whole.

Texture and dynamics are constantly forged which makes listening to this CD a constant surprise.

Visit Ben Monder and Theo Bleckmann on the web.