By BRUCE LINDSAY
November 10, 2012
Sign in to view read count 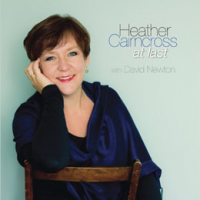 At Last is named for singer Heather Cairncross' cover version of Harry Warren and Matt Gordon's classic love song, but it may equally well serve as an exclamation of relief. This is an album that Cairncross has been thinking about making for some years. In 2011, everything came together and Cairncross was finally able to record her debut solo album, a collection of her favorite love songs. It has been worth the wait.

Cairncross is a vastly experienced singer-a member of the Swingle Singers for a decade, a session vocalist who's worked with Tony Bennett, a member of the internationally renowned Monteverdi Choir, and a regular collaborator with minimalist composer Steve Reich. She's joined on piano by David Newton, a major figure in the UK jazz scene and an 11 times winner of the British Jazz Award for Best Pianist. He's also a composer and bandleader in his own right: a musician with a superb understanding of the accompanist's role who proves to be an ideal partner for Cairncross. Together, they have crafted their own distinctive versions of classic songs.

At Last stands out not by being in thrall to futuristic technology, or by some ultimately abstruse attempt to "update" these songs. It stands out by harking back-by a return, on an emotional level, to the way many of these songs were written to be performed. There's an intimacy to the songs and the stories they tell. Almost every song on At Last is written to be sung by one person to one other. Cairncross and Newton recognize this simple fact.

When Cairncross sings "Where Or When," "Our Love Is Here To Stay"-which opens with her delightful unaccompanied alto voice and features one of Newton's rare but perfectly-judged solos-or "The Nearness Of You" she makes every word count. Her voice, technically excellent and emotionally engaging, gives each lyric a very personal perspective, as if these are her stories, not just her interpretation of others' tales. It's the mark of a great jazz vocalist.

Somewhat bizarrely, there are fans and critics who claim to have heard enough of the American Songbook. It's old hat, they say, had its day, has nothing new left to show-as if there's a "sell-by" date for songs. It may well be the case that there are too many uninspired Songbook recordings out there, but that's not the fault of the songs. Imagination and creativity can still produce new interpretations that can go straight to the emotional core of the lyric and straight to the audience's collective heart. Which is exactly what happens when Cairncross and Newton get together on At Last.

At Last; The Nearness Of You; When I Fall In Love; Taking A Chance On Love; I'm Glad There Is You; Our Love Is Here To Stay; Embraceable You; Where Do You Start?; I'm Old Fashioned; Remind Me; The Very Thought Of You; What Are You Doing The Rest Of Your Life?; Where Or When; Some Other Time.