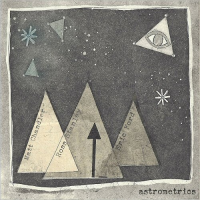 The concept of the organ trio in jazz is well-established and often provides a dynamism that even some big bands struggle to manifest. Happily this is one such trio album. Dispensing with the pedantic formalities first, the quirky title of this album is actually an anagram derived from the first names of each of the band members. But this fact speaks nothing about the music itself which proves consistently engaging.

This is Matt Chandler's third album hot in pursuit of the quintet album with saxophonist Toni Kofi, It Goes Like This and the guitar, bass and drum trio CD After Midnight. Judging by Astrometrics his career trajectory is definitely skywards.

The opener "Funk Work" commences with slinky Wes Montgomery-esque octaves, gradually developing a seething intensity as Chandler explores the upper registers of the fretboard. Courtesy of a keen and memorable head, "The Sting" produces some of Chandler's best work with fluid, fast runs and solid support from Ross Stanley. "El Diablo" powered by Stanley's omnipresent Hammond B3 does indeed move like a devil.

The bluesy "5 Bar Short" is underpinned by Stanley's subtle organ work and cool rim shot infused drumming from Eric Ford. Arguably, the guitarist is heard at his best on no-nonsense fast-paced numbers such as "Dirty Rat" where his arpeggiated runs are clear and precise. This contrasts with the slower, Latin-tinged "Doctor's In The House." For nearly seventy minutes, this talented trio produces some frequently riveting music with an album that flows with seamless sophistication.

Funk Work; The Sting; El Diablo; Doctor's In The House; Intricate Facade; Scene Of No Scene; 5 Bar Short; Dirty Rat; A Change Of Scene (Of No Scene).