Astral Weeks: A Secret History of 1968 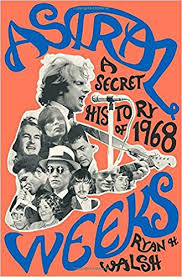 Before thoroughly delving into Ryan H. Walsh's Astral Weeks: A Secret History of 1968, a reader can thumb randomly through its three-hundred fifty-some pages and find nary a reference to Van Morrison or the epochal album after which this story of a pivotal year in Boston, Massachusetts is named. But that perception is as deceptive as the garish, amateurish art adorning the dust cover of a book that is the antithesis of kitsch. The brilliant album by the so-called 'Belfast Cowboy' is more deeply steeped in mysticism than most of his records and the level of detail the author includes about the environs of 'The Hub" at that time accentuates that factor rather than detracting from it. This musician/journalist's writing is more learned than its winning, casual tone would suggest.

For instance, as the author frames his pursuit of a rare Van Morrison live recording, owned by frontman of the J. Geils Band Peter Wolf, all of sudden (it seems), the author is ensconced in the latter's apartment, deep in conversation and regaled with stories from this 'member of Boston rock royalty' during his days at WBCN, plumbing the depths of the radio station's music library with the young and volatile songwriter/performer, sharing their mutual love of blues and r&b.

Such an incursion into contemporary history is a marked contrast to the on-again off-again examination of cult leader Mel Lyman's presence in the music scene around the city, a motif that carries increasingly ominous undercurrents and also allows Ryan H. Walsh the latitude to relate the (d)evolution of folk music of the period. That sequence of events is a precursor to the dissolution of Morrison's tempestuous business and personal relationship with famed record business mogul Bert Berns following the dissolution of the Irish rockers Them, in subsequent solo work that brought no small measure of success (in one form, the now-classic "Brown Eyed Girl") and, in turn, Van's marriage. Readers of A Secret History of 1968 doesn't need to be aware of the Irishman's recurring expressions of bitterness on this front in his original songs, but anyone cognizant of his running commentary over the years can only become further enlightened before hitting the one-hundred page mark and the novice gets a graphic depiction as well.

It's crucial to emphasize Astral Weeks is definitely not merely a dissection of Van's history, but much more than that. Ryan H. Walsh uses Morrison as a jumping off point to investigate a panoply of subjects that, taken together, posit Boston as an epicenter of cultural shifts within which the creation of this pivotal record seems predestined. And the author doesn't just skim the surface of any of his subjects including spiritualism or the contrived 'Bosstown Sound' hype of the era: he goes far beneath the surface of the city's distinction as a fountainhead of research into psychedelics and its less-than-savory reputation on race. In doing so, Walsh transcends truism and preconception.

And, by inserting at least cursory mention of Van Morrison throughout discussion of all these subjects, the writer retains his readership's interest, at the same time creating suspense. As a result, the return to this topic in some detail at the home stretch of Astral Weeks, resounds, at least to some degree, like a band returning to its intro of a song after a lengthy improvisation. Meanwhile, Ryan's early mention of Rolling Stone Magazine's thorough examination of Lyman and his cult/community is telling. The publication's in-depth articles function as a template for this book. The author's discerning persistence is that of an ace reporter, as exemplified by how he tracks down former sidemen of Morrison's to confirm the facts rather than rely on mere rumor or hearsay.

Thus, the regular recurrence of asterisked addenda to his story are not so much peripheral as 'tidbits' that more fully illuminate the subject at hand and give Ryan H. Walsh credence as an authority on his subjects (as do nearly twenty pages of notes at the end plus a very extensive bibliography). For instance, in the context of Walsh's search for recordings of Van The Man and company, sans the electric instruments they used during their summer tour of 1968, it's a provocative reference indeed to Victor "Moulty" Moulton of Beantown garage band the Barbarians. An early lineup of the Band backed the one-handed drummer in recording sessions around the time that group was backing Bob Dylan in 1966. And sharing the sequence of events leading to the metamorphosis of once all-classical WBCN into an FM rock station par excellence, simultaneous (not merely coincidental!) with the burgeoning success of the Boston Tea Party as a live music venue, is something of a microcosm of rock's evolution in the Sixties.

The behind-the-scenes account of James Brown's concert at Boston Garden in the wake of Martin Luther King's death will no doubt pique more than a little curiosity, in addition to imbuing A Secret History of 1968 with tangible a sense of time and place. The select set of photographs is likewise provocative, some perhaps in unintended ways. In one shot Walsh specifically (deliberately?) references, for instance, the predatory look on Bert Berns' face as he glances at Van's paramour Janet Planet, which speaks volumes about the record mogul's persona.

The true value within this compelling read, however, is that, as Ryan H. Walsh tells it, the creation of Van Morrison's landmark album is as profound a historical event as any of those other often-contradictory scenarios he explores. Which makes it both odd and unfortunate that the author clumsily muffles his conclusion, even after he clarifies it so succinctly for himself near the end; it's almost as if this resident of Boston doesn't really know how to end A Secret History of 1968 or, perhaps closer to the truth, given the epiphany he describes, he doesn't want the story to end.

Rather than conclude his epilogue, "Afterwards," with details of recording sessions for the Astral Weeks album plus observations on the fitful sequence of events post-release (based on conversations with musicians involved as well as late producer producer Lewis Merenstein), Walsh goes backwards, returning to the legacy of Lyman, which only results in a less than emphatic close. It's like the performance of a band that finishes its set proper with a rousing number, then makes a desultory choice for an encore..

A Secret History of 1968 deserves a more authoritative finale, if only because of its source inspiration in music. The fact is, Ryan might well have confined himself to that root topic and, given the novel insight he so regularly offers-for instance, the history of the Velvet Underground's connection to his city rather than that of New York with which it's often associated-he would've generated a worthy tome on its own terms. But Walsh had the courage, not to mention the ambition, to go further afield, the result of which is that, like the durable work of art that is Van Morrison's epic, Astral Weeks the book mirrors its namesake's creation.

As such, right along with the ancillary themes that elicited this author's attention, this exhaustive piece of writing should be seen as one more current of culture in that stream of consciousness to which the book's title refers.