In recent years, the guitar trio—with bass and drums—has reached mythic status. Once an obscure instrumentation, the setting has been elevated to new heights by young guitarists seeking the kind of interplay for which the piano trio is so lauded—the very interplay so written about that it has become a cliché to even mention. After all, who has not read some nameless jazz writer go on ad nauseam about the "serene conversations" of the Bill Evans trio? That said, the format does afford real opportunities for musical dialogue perhaps unrealized by guitarists of the 1950s and '60s, with the exception of a few who were brave enough to play in trio such as Jim Hall, Grant Green, and Barney Kessel. These exchanges arise not just from the small size of the trio, but more importantly from its lack of narrowly defined roles. In a way, the modern trio possesses neither accompanist nor leader, leaving open the possibility for success or failure, for agreement or disagreement. Functions change often, and with enough fluidity that they might never have existed at all. 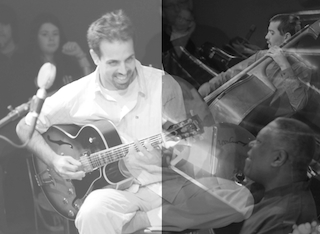 On Friday June 5, Israeli guitarist Assaf Kehati appeared at Washington D.C.'s Twins Jazz along with bassist, Noam Wiesenberg and legendary drummer, Billy Hart, who is a D.C. native. Twins is noteworthy for its lack of pretense and exceptional booking, featuring rising musicians from the nation over. The Boston-based guitarist, for instance, is a product of the New England Conservatory, where he became involved with Hart. Kehati's style on guitar is graceful and often imaginative, relying on pristine tone, formidable technique, and a rich chordal vocabulary. And while his conception shows the influence of a number of the masters of his instrument, Jim Hall and Kurt Rosenwinkel chief among them, it also exhibits the pianism that has been so instrumental in the recent rise of the guitar.

And if the guitar's role has changed in contemporary jazz, so too has that of the drums. Even if the master drummers of the 1960s were able to contribute melodically, a great number of contemporary drummers—take Ari Hoenig, for instance—have perhaps recognized to a greater degree that rhythm contains the very same expressive capabilities as harmony. Expounding on that realization, they have brought the drums to the fore of the music. As such, it is only fitting that Billy Hart, one of the forebears of contemporary drumming, should take the stage. His advanced sense of form and keen ear for melody have not only made him influential among young drummers but, over the years, also earned him stints with Miles Davis, Herbie Hancock, and Wes Montgomery.

Friday's performance, made possible with support from the Israeli embassy in Washington, D.C, wove deftly through standards and Kehati originals before finishing with a rendition of the classic ballad, "My Ideal." Kehati's intro, which seemed to recall Keith Jarrett, relied on the shimmering, hymnal quality of his guitar, his phrases moving in and out of rubato. As the band entered, Hart soaked the music with new exuberance, pushing it toward the eloquent but never toward the maudlin. All the while, Weisenberg mediated the interplay between his bandmates, sitting back on the beat; guiding it from afar. Kehati's solo climbed through and around the changes, never straying too far from the melody. He displayed great talent for organic improvisation, the kind that can make simple phrases sound exciting not because they are the rearrangement of transcriptions and vocabulary, but rather, because they are truly spontaneous. When it came time for the drum solo—an oddity over a ballad—Hart felt at home. He played the simple melody sincerely and without irony or sarcasm. The posturing novelty often associated with the drum solo had been washed away. As Kehati restated the melody to conclude the evening's program, it was clear to the audience just why the guitar trio has risen to prominence of late. For its democracy and its expressivity, the setting should be praised.