By KARL ACKERMANN
September 5, 2017
Sign in to view read count 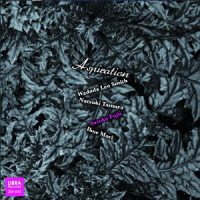 The soul of Gato Libre, and the glue that holds numerous global jazz orchestras together, are in the musical and personal partnership that has mastered creative music in a variety of formations and settings. Satoko Fujii and Natsuki Tamura are prolific and boundless and Aspiration is the latest of their more than sixty recordings together. Aspiration credits Fujii as the album's leader, by virtue of her contributions as the primary composer. Joining Fujii and Tamura are the legendary trumpeter/composer Wadada Leo Smith and the electronics pioneer Ikue Mori. This album marks the first time that Smith and Mori have worked with Fujii and Tamura.

A Japanese native, who migrated to New York in the 1970s, Mori began her musical career as a mostly self-taught drummer with an affinity for the NY punk rock scene. As she moved on to more experimental music, she shifted to drum machines, occasionally adapted to accommodate sampling. More recently, Mori has taken to the laptop for playing and composing. She has recorded a dozen albums as a leader, dating back to 1995, and continuing through her recent duo recording Highsmith (Tzadik, 2017) with Craig Taborn. Her presence on John Zorn's label dates back more than three decades and she has collaborated with Fred Frith, Dave Douglas, Butch Morris, Marc Ribot, Evan Parker, Bill Laswell, Sylvie Courvoisier, Susie Ibarra and many others over the course of her long career.

Smith and Mori are well acquainted having teamed up for another Tzadik release, Luminous Axis (2002) and working together on other occasions, as recently as Smith's 2016 Four Symphonies performance at San Francisco's Wattis Institute. Smith, of course, needs little introduction as he has preserved his place as one of the foremost composers, musicians and educators in American music, and a finalist for the 2013 Pulitzer Prize for Music for Ten Freedom Summers (Cuneiform, 2012). Smith developed a unique form of notation, which he calls "Ankhrasmation," and founded his own label, Kabell Records in the early 1970s.

Those familiar with the dual trumpets of Kaze may be anticipating the type of stylistic volatility that Tamura and Christian Pruvost provide but Aspiration has a more consistent overall tone about it. "Intent" opens with a trumpet solo—Smith, by the sound of it—and later goes into unison playing then drops off into silence. The trumpets reemerge and Fuji joins in on piano, with Mori adding effects from the laptop. "Liberation" is a group composition where Fujii takes more of a background role. Mori's laptop dominates the opening of "Floating ," lending a wraithlike atmosphere that suits the title. Tamura's trademark techniques add a further eeriness to the piece while Fujii's keys rattle around like bones in a closet. The tune ends with the stately unison trumpets completely changing the undercurrents if not the mood. The title track is primarily a showcase for Fujii as she incorporates multiple styles of playing, to the creation of a vivid overall soundscape. "Evolution" moves from the extraneous electronic transmissions to lyrical piano, joined by—and then superseded by—an inspired passage from the trumpeters. "Stillness" closes the album with a slow build up from the minimal drone of electronics and distant, ghostly trumpet. Half way through the ten-minute piece—Tamura's sole writing contribution—textures emerge, overlay and then flatten out, returning to earlier motif.

Fujii—along with Tamura—have rounded out this unique quartet with two of the most eclectic artists of our time, both at the peak of their abilities. Fujii's compositions are lyrical, free, episodic and engrossing, and as always her music is as unpredictable as it is inspiring. She scales to imposing heights in her architecture while bending to accommodate sweeping melodies, above and below the cover of drones. With Aspiration Fujii's her audacious yet interconnected compositional visions endure and expand.