Justin Marcus: Ask Me How Do I Feel 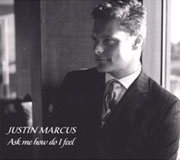 Justin Marcus will not be the next Michael Bublé and that is a damn good thing. Marcus is a refreshingly non-vocalist vocalist. His voice is no Sinatra knock-off, nor does it fall into the Tony DeSare-Peter Cincotti mold, though with these and Harry Connick, Marcus shares movie-star looks. Marcus has a singularly masculine voice with just enough wild in it to make it interesting.

On first listen, I would have placed Marcus' birth place below the cotton curtain by his relaxed yet assertive phrasing (think Harry Connick on steroids without the New Orleans brogue) had his almost accent-less diction not thrown me off, as he is a New York City native. As it is I was not too far from the truth as Marcus attended college in New Orleans and certainly was exposed to that fertile music scene.

Marcus' first recording, a self-produced effort titled from a line in Frank Loesser's neglected "If I Were a Bell, is a mixture of the old and new as the singer/pianist deftly mixes into solutions songs as different as Louis Jordan's "Is You Is or Is You Ain't My Baby and Bruce Springsteen's "Meeting Across the River. His nod to Sinatra (in name only) with "Lady is a Tramp and "Embraceable You shows how intentionally Marcus sets himself apart from the current population of male jazz vocalists. Marcus is backed by a competent band that never gets in his way. Marcus is an excellent pianist, completely capable of accompanying himself as he proves on Paul Simon's "America.

Justin Marcus is the most interesting vocalist to emerge into jazz in recent memory. He is a New York City product infused with the South like bourbon with mint in a julep. His introductory repertoire is carefully and thoughtfully chosen and superbly performed.

Let's Get Away From It All; If I Were A Bell; Arianne; Is You Is Or Is You Ain't My Baby; Lady Is A Tramp; Embraceable You; I Can't Get Started; Meeting Across the River; My Lean Baby; America; Learnin' The Blues; Do You Know What It Means To Miss New Orleans.