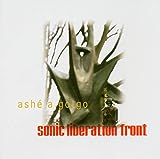 At Satalla in late January, Sonic Liberation Front delivered a rousing set that was representative (almost song-for-song) of the group's new album, Ashé A Go-Go. Their second release since forming in 2000, Ashé continues the Front's compelling combination of Afro-Cuban batá drumming from the Nigerian Yoruba tradition with angular horn melodies in the style of Ornette Coleman and others.

The group opened the set at Satalla with the album's title track, written by percussionist Kevin Diehl, which features a melody for unison horns reminiscent of Coleman's "Lonely Woman. Heard live, the rhythmic interplay of the three batá drums—the okonkolo, itotele and iya, or "mother —was even more hypnotic than on record, and over this trumpeter Kimbal Brown delivered a burning, bop-influenced trumpet solo. Before the end of the tune, vocalist Venissa Santi led a call-and-response of traditional Yoruban lyrics with the rest of the ensemble.

"The Sirens, written by alto saxophonist Adam Jenkins, is in its horn arrangements a direct descendant of Wayne Shorter's "Footprints. The insistent repetition of the bass and percussion patterns creates a slow, loping groove, against which the saxophones take heated solos.

By the time "Agua Dulce rolls around, both in concert and on record, the tune is an oasis of simplicity and harmony. Chuckie Joseph plays a basic, repetitive three-chord progression on guitar and sings heartfelt Yoruban lyrics. In concert, "Agua Dulce was made even sweeter by the addition of Santi harmonizing above Joseph.

Closing out the album is a rumba written by Diehl titled "Gema Oculta. It was the closer at Satalla too, for which the group was joined by John Benthal and Kevin Kuhn on guitars. The duo opened for Sonic Liberation Front earlier in the evening with lively compositions and arrangements featuring uncommon instruments like the mandocello and Cuban tres guitar.