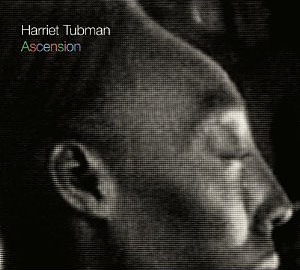 The raison d'être for the band, Harriet Tubman, is an almost aching musical yearning for a complete freedom. It is a freedom from genre and certainly on Ascension, complete freedom from style as well as style. This what the 20th Century Spanish poet and playwright, Federico Garcia-Lorca described as the heart of duende, a holistic alternative to style and mere virtuosity, seeking an elevated level of delving into the depths of the soul so that the music dilates the mind's eye, in order to render its intensity almost unendurable. In fact, virtually unbeknownst to the artists—guitarist Brandon Ross, bassist Melvin Gibbs and drummer JT Lewis, also including the opposing trio of trumpeter Ron Miles, and turntablists, DJ Singe and DJ Logic—all the elements of melody, harmony and rhythm melt away to create a completely spiritual corkscrew of notes, voices and accents. The resultant music pulsates, pirouettes and punches its way into the mind's ear, aided by the very magic of its spirituality.

The magic is also in the opposing forces of each trio. The original Harriet Tubman of Gibbs, Ross and Lewis is a molten mix of malleable and ductile material that screams out of the metallic elasticity of Ross' strings, the throb and double stops of Gibbs's bass and the churning of Lewis's drums. The trio of Miles, Singe and Logic is an almost glacial, ghostly reflection of the music itself—a parallel reality that mirrors the heat of Tubman with the cool of a contrapuntal vibe.

The powerful mix of the concerto unfolds most tellingly in "Down Shift/Ascension" and in "Night Master/Ascension." Soloists seem to do battle with the ensemble, but creating diametrically opposed characters in the music. In the former sequence, the screaming glissandos of the turntablists burn through the seemingly chaotic ensemble playing behind them. In the latter, Miles is aglow in the bronzed heat of what is set as his musical backdrop, by the rest of the players.

Much is being made of Harriet Tubman's channeling the spirit of John Coltrane's 1965 Ascension (Impulse!), as well as Ornette Coleman's Free Jazz (Atlantic, 1960), recorded five years earlier (coincidentally also played by a double trio). But there is another consideration to be made here: both the inspirational artists reached for beyond the realm of acceptable norms of the music of the day, in their day. Harriet Tubman does much the same as its members break the mold of 21st Century music as well. In doing so, the collective improvisation of its musical constituents succeeds in creating an exciting new musical canvas featuring molten textures, dripping with an expanded palette of colors as the music of Ascension sails into the stellar regions of mind and universe.