By IAN PATTERSON
January 30, 2011
Sign in to view read count 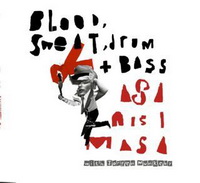 The opening "Red Rum," which flows seamlessly into the title track, comes barreling out like a tornado. There is no escape from raucous brass, pummeling drums and Munkeby's heavy riffing guitar, inspired perhaps by his Norwegian "black jazz" group, Shining. The all-enveloping collective voice all but drowns out the vocals but is captivating in a brutally powerful way.

The Björk-inspired "Stay on the Surface" provides an album highlight: Gunhild Overegseth's dreamy voice is lifted by warm brass, subtle percussion and a dash of electronic snap and crackle on a beautiful song which would brighten up the rather staid commercial airwaves. The undercurrent of electronica comes from new member Sofus Forsberg, and underlines the contemporary identity of BSDnB, for whom mainstream 20th century big band jazz may as well have never existed. Forsberg's two electronic-based compositions are given a big band facelift by Jens Christian "Chappe" Jensen's imaginative arrangements: "No Beat" occupies a time and space somewhere between Sun Ra and Joe Zawinul, with a heavy rock underbelly; and the pulsating drum 'n' bass of "Everything is Good" features layers of shimmering brass, and ethereal, wordless vocals reminiscent of Swedish/Finnish electronic folk-rock band Hedningarna.

ADVERTISEMENT
The full force of this giant ensemble is unleashed on "Lay Back," with Turid Guldin singing of consumer gluttony, and featuring Jacob Danielesen's spiky, tumbling tenor saxophone solo. Alto saxophonist Julie Kjaer's and baritone saxophonist Mette Rasmussen weave a primal, free-jazz course on the intro to "You've Got a Cold," a pop-ish vocal number with synth-layered drum 'n' bass, nicely buoyed by layers of spiraling brass. Guldin also sings on the moody "Numb & Down," where the ensemble plays a quietly supportive role. In spite of the artillery at his disposal, Jensen's arrangements employ space, lull and occasional chill-out ambience, contrasting with the sonic barrage of the band at full throttle. Even in the midst of Munkeby's powerful jazz-rock/progressive "The Smoking Dog," there is pause for a music-box piano motif. The industrial swagger and racing pace of Munkeby's "Stalemate Longan" Runner" boasts riffing trumpets and a heavy rock rhythm, but gradually subsides, giving way to a peaceful coda.

This is a hugely enjoyable recording full of visceral power, verve and no shortage of soul. It marks BSDnB as an original contemporary voice with an utterly progressive approach to making music. How BSDnB rehearse—or where it get gigs—is anybody's guess, but any promoter with a fat wallet and 27 chairs shouldn't think twice.

Track Listing: RedRum; Asa Nisi Masa; Stay on the Surface; Lay Back; No Beat; The Smoking Dog; Numb & Down; You've Got a Cold; Everything is Good; Stalemate Longan Runner.