By BRUCE LINDSAY
February 14, 2011
Sign in to view read count 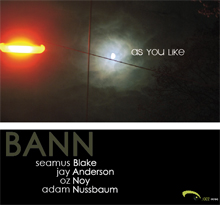 BANN came together in 2007, combining the experienced rhythm section of bassist Jay Anderson and drummer Adam Nussbaum with the younger duo of guitarist Oz Noy and tenor player Seamus Blake. While the band has been busy playing live on the European scene it's taken almost four years for its debut album, recorded in May 2009, to appear. As You Like melds a fascinating blend of bop and post-bop jazz, rock, blues and country which gives all four members of the quartet a chance to shine.

Blake and Noy are confident and melodic players who engage in some superb unison playing: on the introduction to Anderson's "Will Call" it's at times hard to tell the two instruments apart as Noy's guitar takes on a saxophone-like sound. Elsewhere the two instruments are more readily distinguishable, but Blake and Noy's deft patterns are no less impressive.

Noy is a versatile guitarist, at times stylistically in fusion territory, at others reminiscent of Robert Fripp or drawing on the blues. On "At Sundown," another Anderson tune, Noy takes the lead with some rough-edged, country style slide guitar while Anderson's own fat-toned bass solo adds to the atmosphere of late nights on the range.

Thelonious Monk's "Played Twice" is given a lively arrangement that features excellent performances from Anderson and Nussbaum. The sole group composition, "As You Like," has a loose and slightly old-fashioned "jam band" sound, as does Noy's "Minor Shuffle." They're both light and straightforward tunes but the band's understated performance ensures that they are also entertaining—"Minor Shuffle"'s insistently shuffling hook is enjoyably persistent.

Joe Henderson's "Isotope" is given a funky arrangement—thanks, especially, to Nussbaum—with Noy creating washes of guitar chords under Blake's tenor saxophone. David Crosby's "Guinnevere" is probably the most surprising song choice on the album—it's also the most delightfully inspired. Blake plays the lead line, his tenor echoing the beauty of Graham Nash and David Crosby's original vocal: Noy's guitar is restrained and subtle, building on the beauty of Blake's emotive performance.

The players who make up BANN have a wealth of talent and experience and it all comes together to make As You Like a fascinatingly eclectic mix of tunes. The musicianship is never less than excellent and the combination of styles is beautifully achieved.