Nils Lindberg / Margareta Bengtson: As We Are

By CHRIS MOSEY
November 5, 2008
Sign in to view read count 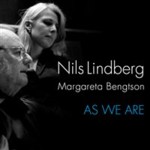 With climate change and recent weather, the Shakespearean sonnet "Shall I Compare Thee to a Summer's Day?" would seem to have become a trifle outmoded. Still, where there's a Will there's a way and Nils Lindberg has set the piece to music. Lindberg is a true Renaissance man. From his home in Gagnef, a small village deep in the forests of the Swedish province of Dalecarlia, he emerges every now and again to dazzle us ordinary mortals with his many talents. Best known as a composer and arranger, he refuses to accept categorization and works with choirs, jazz bands, and symphony orchestras at will. Lindberg was the eminence grise behind Duke Ellington's favorite vocalist, Alice Babs. He wrote arrangements for Duke and composed a number of works for the Hanover Symphony Orchestra. He also, without batting an eyelid, collaborated with Josephine Baker, one-time infamous Jazz Age stripper and Judy Garland, who was as American as apple pie.

In 1986 Lindberg performed his own works at the funeral service for Olof Palme, Sweden's assassinated prime minister. Three years later he wrote the music for a service given by the Pope in Uppsala Cathedral. He also found time to bring the lilting, melancholic strains of Dalecarlian folk music to the attention of a wider world in a memorable series of concerts and records.

At the age of 75, this remarkable man has once more left Gagnef to record As We Are. It is more jazz than anything else and launches the solo career of Margareta Bengtson (ex-The Real Group), the Swedish soprano most likely to take over the mantle of Alice Babs on the world stage.

Out of his (loosely) classical bag, along with his Shakespearean foray, Lindberg has put music to "Remember," a haunting (and still pertinent) piece by 19th century English metaphysical poet Christina Rosetti. It's one of the album's best tracks. Had just a little more attention been paid to the clarity of the words, it might even have achieved greatness. Unfortunately Bengtson "swallows" some of them. Unlike the Muppet cook, Swedes actually do English exceedingly well, but as non-native speakers they're bound to get small things wrong and God is in the detail. Especially when it comes to poetry.

ADVERTISEMENT
No such problems on the jazz front. "B.B. Blues" (BB = Baritone Bass) and its brother "Blues for Bill" provide a chance for Bengtson to shine at wordless scatting. She makes a nice job too of the ballad "As You Are," probably Lindberg's best known composition, with words by American bassist Red Mitchell. The attractive ballad "Tomorrow" is by Jan Ohman, a Dalecarlian neighbor of Lindberg's. "Springtime" and "Dry Martini" are kinda-Dukish, "Santa Barbara" kinda-Bossa Nova.

Folk music is represented by an irreverently jazzy arrangement of the Finnish anthem "I Remember Karelia" with good work by Anders Paulsson on soprano saxophone. On "Tingsmarschen," a Dalecarlian marching tune, Lindberg takes a piano break to remind you that he's also no slouch as an instrumentalist. It's infuriating just how talented this man is!

At his age, it can only be hoped that he did not intend the closer, the piano solo "Epilogue," as a reference to his life's work. His music is both experimental and intensely melodic, angularly lyrical—if there is such a thing. It refuses politely but very firmly to sit comfortably in the background. In this day and age we need more of that sort of thing.

Remember; B.B. Blues; As You Are; Springtime; I Remember Karelia; Santa Barbara; Skylark; Tingsmarschen; Tomorrow; Dry Martini; Blues for Bill; Shall I Compare Thee to a Summer's Day?; Epilogue.

Title: As We Are | Year Released: 2008 | Record Label: Prophone Records