Larry Goldings Trio: As One 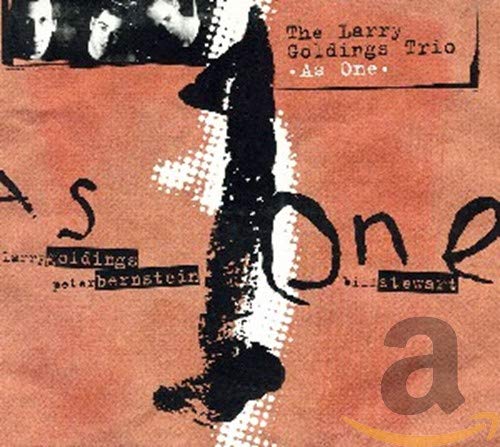 The words “graceful” and “organist” can almost never be used in the same sentence. But the agile fingering of Larry Goldings is anything but the coarse, gritty soul music that you hear everywhere. His follow-up to the 1999 Moonbird trio session and the Peter Bernstein-led 1997 trio Earth Tones (Criss Cross) is his best work to date. Like the prior trios, this band is made up of Goldings, guitarist Peter Bernstein, and drummer Bill Stewart. The three musicians have been playing together since 1988 and it shows. Stewart, who recently toured with guitarist Pat Metheny’s trio, made two critically acclaimed records for Blue Note Snide Remarks (1995) and Telepathy (1997), and has been the drummer of choice for John Scofield this past decade. Guitarist Peter Bernstein a regular with both organist Mel Rhyne and saxophonist Lou Donaldson has a fluid light touch that favors this trios lyrical side.

Goldings has had an impressive list of instructors and mentors including Keith Jarrett, Jaki Byard, Ran Blake, and Sir Roland Hanna. He joined Jim Hall’s band and stayed for 3 years, also taking gigs with Maceo Parker, and John Scofield. His prior recordings always seem to begin with the core musicians heard here. Except for a side projects here and there, these three musicians have built their careers around each other. Every time Goldings has wandered off, be it last years hip-hop influenced VooDoo Dogs or a acoustical piano date with Paul Motian and Larry Grenadier, he has produced less than exciting material. All the reason to stick with a great lineup.

The trio plays exacting balanced music from a tame take on “The Thrill Is Gone” to the bop influenced “Calls.” They seem as unselfish as the Modern Jazz Quartet, not tilting the axis of each track in favor of one musician or another. They take on The Zombie’s “Time Of The Season,” a staple sixties rock anthem with the coolness and hip-sway or the original. Two tracks “Mynah” and “Glass” diverge from the formula. The latter is a three-minute solo-improvised piece with lots of weird effects. The former is a Bill Stewart piece from Telepathy, a page from Medeski, Martin, and Wood’s groove book that hopefully is a signal of new territory for the band.

The trio play jazz so hip and with such an insider’s groove there seems to be no reason to add pieces and parts to this already whole lineup.

Mixed Message; Going To Meet The Man; The Thrill Is Gone; Back In The Day; Calls; As One; Time Of The Season; Mynah; Glass.