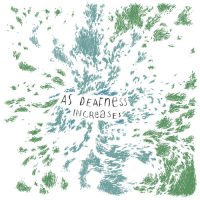 Do not attempt to adjust the speed setting on your turntable. The music delivered by As Deafness Increases is indeed punk, or perhaps noise. It's just that the punk presented is at a glacial pace, or maybe it's the noise of Merzbow performed as if there were a sleeping baby in the room.

The 20-minute opening track "Svalbard" is a slow-moving drone piece that is left intentionally open-ended. The players exercise no boundaries. Minimalist bowed bass and micro-tones of breathe inhabit the grayness of the tones. Their background in classical music informs the approach, but it is free music that sets this slow moving river of gelid ice in motion.

The remaining three shorter pieces "Adia," "Adib," and "Adic" work themselves into more concise expressions and provide a sort of map for the adventurous listener. These three pieces might best be experienced first before any attempt to scale the "Svalbard" in the dark of night.

About As Deafness Increases