By NENAD GEORGIEVSKI
April 6, 2011
Sign in to view read count 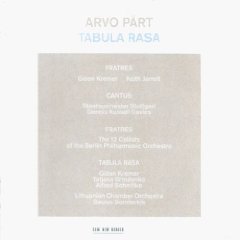 A question that has always been asked, regardless of genre, is whether music can be conservative and revolutionary at the same time. Various composers have surfaced in recent times with brilliant compositions, but their work has not adhered to any of the schools of composition that make up the 20th century classical music. These composers have often drawn inspiration from musical principles and philosophies that are foreign to the classical heritage, and in general have been less concerned with academic approval and theoretical correctness than with communicating directly with the listeners.

One of those composers is Arvo Pärt, whose spiritually resonant music has evolved from a deep Christianity (as well as the music of Steve Reich, Satie, Lukas Ligeti, John Cage and Russian neo-classicism, among many), and whose work is one of the defining soundworlds of the last 30 years. Journalist Tom Casetta wrote that there are many paths to God and the music of Arvo Pärt is, without a doubt, one of them. His music demands an intuitive mode of perception which includes the experience of silence, something that is ever present in the tradition of the Orthodox Church.

Pärt first came to broad public attention in 1984, even though for years prior to that he was a prolific composer of film music in his native former Soviet Union. When in 1984 Manfred Eicher decided to start a new branch to his ECM label for composers (The New Series), it was a result of hearing the music of Pärt on the car radio during a late night drive. It struck him so powerfully that he had to stop the car to listen. "What moved me in his music," wrote Eicher, "was clarity—the direct path to ear and mind, a drama of quiet passion. The music was cathartic, a music of slowly beating wings. A drawing-inward of all feeling, as if the music were burying itself in a crypt of its own making: pitiless and solitary. A music of innermost calm demanding concentration from the musicians as well as from the listeners. These compositions didn't make the vulnerable soul turn inward; they created a dialectic of action and stillness."

There is plenty of music that is as profound as Tabula Rasa , but only rarely does it reach similar emotional heights. The work is partially a prayer and partially a meditation that burns with passion and suffering. Pärt's music can be described as "simple," in that it features very few instruments, which are sounded with maximum effect and timbre. Pärt has coined the word "tintinnabulation" (which takes its name from the Latin word for bells) to describe his style of work which dates from the early 1970s. This places unusual emphasis on individual notes and makes extensive use of silence. All of these compositions were performed by some of the most important names in the music world. The first variation of "Fratres" (Brothers) is performed by Gidon Kremer on violin and Keith Jarrett on piano, and they hit it off wonderfully here. Rarely has Jarrett played such spartan but effective music as he does here.

"The Cantus In Memory of Benjamin Britten" is based on a melody dating from the time of death of this English composer (in December 1976)."Cantus" is played by the Stuttgart Town Orchestra and features the "Adagio" from Mahler's Symphony No. 5, with slowly building strings and the toiling of a single bell. The second version of "Fratres" is performed by 12 cellists from the Berlin Philharmonic Orchestra. The title piece is played by the Lithuanian Chamber Orchestra with Gidon Kremer (for whom Pärt exquisitely wrote the composition), Tatjana Grindenko on violins and Alfred Schnittke on prepared piano. It is filled with silence and simple triads for the piano and the violins, and full of intrinsic emotional snapshots and several sections culminate in climactic buildups of volume and intensity. Here, shadow and light interact with intensity. As the title says, the end result has an anodyne effect, leaving the listener cleansed, healed and moved.

To honor the composer's 75th birthday, a deluxe edition of the album has been released, including a 200-page hardbound book with essays, photographs, study scores of all the works on the CD, and copies of the manuscripts of "Tabula Rasa" and "Cantus."

More than often modern music is thought that it has to sound like a toolbox descending a staircase. Pärt is the total opposite; his music burns with intense and quiet passion. It almost forces the listener into introspection and contemplation. This work is one of the marvels of the modern age and is still as captivating as when it was first released. Just like the works of the old masters that echo for centuries, this masterpiece by Arvo Pärt will echo and arouse the deepest of emotions eons after it was first released.