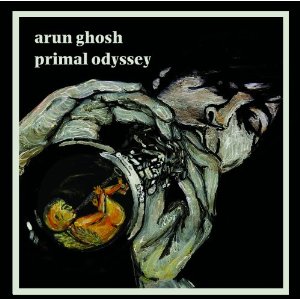 There you are, waiting for the next Indo-Jazz album to arrive, and then two come along at the same time. October 2011 has already seen the release of Grand Union Orchestra's If Paradise (Red Gold), and now here comes clarinetist Arun Ghosh's Primal Odyssey.

It has been a long wait too, in Britain anyway, particularly for Indo-Jazz with a Bengali flavor—since Ghosh's debut set, Northern Namaste (Camoci), and pianist Zoe Rahman and her reeds-playing brother, Zoe & Idris Rahman's Where Rivers Meet (Manushi), both released in 2008.

Idris Rahman is heard again on Primal Odyssey, but this time mostly on tenor saxophone, rather than the clarinet he played on Where Rivers Meet. Along with Ghosh and bass clarinetist Shabaka Hutchings, Rahman forms the three-reed frontline on the album, powered—and powered is the word—by acoustic and electric bassist Liran Donin and drummer Pat Illingworth.

Bengali music is as multifaceted as that of any culture, but is probably best known in the west for its exquisite ballads and love songs, as uplifting to regard as flowers. That was the strand which the Rahmans celebrated on Where Rivers Meet and which provides some of the exalted moments on Grand Union's If Paradise.

Ghosh's vision for this project, however, is altogether darker and in-your-face. And that goes for his taste in artwork as much as his direction in the music. There is a double-page spead visual in the fold-out booklet accompanying Primal Odyssey, referencing the opening track, "Caliban's Revenge." Turn it upside down, like one of those trick paintings loved by the Victorians, and it becomes crudely gynaecological. Lucian Freud meets Francis Bacon. 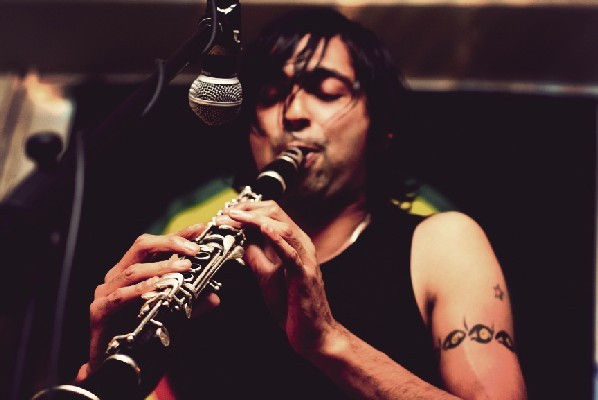 But it is Ghosh's music that concerns us here: turbulent, fired-up, rippling with sinew and driven by thick, bottom-heavy ostinatos. Only two tracks, the wistful "Eros" and pastoral "Nocturne (Chandra Dhun)," inhabit a gentler arena. For the rest, the music—all of it written by Ghosh—is positively urban, both in the mix of heritages the word implies in 2011 and in the vibe and beat-centricity of the music. It is thrilling stuff; rough sex for the ears.

The three reed frontline was in part modeled, says Ghosh, on Indian shenai master Bismillah Khan's classic ensemble, which was composed of three shenai and percussion. But there the similarity ends, for Khan's delicate and mellifluous sound is not also replicated. Ghosh's other model was saxophonist Ornette Coleman's chord-less quartet. And that—along with bassist Charles Mingus' confrontational aesthetic—is closer to the money.

Bismillah Khan's legacy is, perhaps, directly alluded to on "Lal Qil'ah (The Red Fort)." In 1947, it was Khan's shenai which rang out from the ramparts of Delhi's Red Fort as the Union Jack was lowered and independent India's own flag raised. Ghosh's "Lal Qil'ah," however, is the most swaggering track on a notably vigorous set. (If you want to hear some classic, three-shenai Khan, the two-CD compilation, The Shenai's Humble Master, released on Saregama in 2007, is a rewarding port of call).

All three reed players get to solo—Rahman's tenor cooks on "Unravel" and "Headrush"—but Ghosh is the main man, framed by Rahman and Hutching's bass register riffs and drones. Drummer Illingworth, recently heard on saxophonist Jan Kopinski's funk/free improv group, Reflektor's Mirrors (33 Jazz, 2011), is, as ever, powerful without being overbearing, and bassist Donin locks right in.

A tremendous album. Just don't show the inner sleeve to anyone of a nervous disposition.