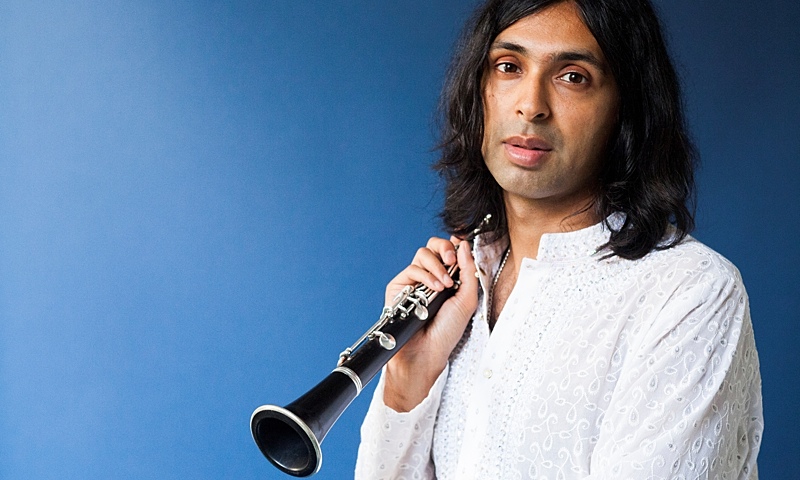 By IAN PATTERSON
November 11, 2013
Sign in to view read count

What I’m about is jazz. It’s just that I’m using another language to the blues, or show tunes or indeed avant garde experimental music. &#151Arun Ghosh

A South Asian Suite is the fruit of a commission by Manchester Mega Mela—a huge open air celebration of South Asian culture that took place in 2010: "I wanted to bring together styles, not just from Indian, which is often very central to how South Asian culture is presented in the UK," explains Ghosh, "but also Pakistan, Nepal, Sri Lanka and Bangladesh."

To represent musically such diverse areas was clearly a sizeable challenge: "These are countries which because of geography, history and culture have hugely different attitudes to creating music," says Ghosh, "and hugely different instrumentation and styles."

The music, however, which was written on the piano, birthed relatively quickly and painlessly as Ghosh relates: "The main six movements developed over the course of a day and a half. It came very naturally. It just flowed out of me in a way other things don't. Being commissioned to write something can bring that clarity because you kind of know what you have to do." Ghosh talks of the self-imposed brief he worked under and credits producer Chrys Chijiutomi's significant contribution: "Chrys was quite central to the music conceptually," Ghosh acknowledges.

Though most familiar with Indian, Bengali and Bangladeshi styles of music, on A South Asian Suite Ghosh also taps into the Qawaali style of Sufi devotional music. Cinematic in breadth, Ghosh's music evokes vast skies, mountainous landscapes and pastoral scenes on the one hand and the rude bustle of city life on the other. 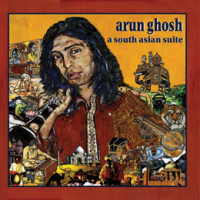 The suite, however, is as much about conjuring ideas and feelings as it is about representing musical styles: "It was meant to be less a recreation of folk styles and more of an impressionistic work," Ghosh explains. "It was coming from the head space of being a British Asian from a Northern town so a lot of these pieces came from my imagination; I'd never been to Nepal. The melodies flowed out of me, and I think partly that's the folk ethos. For Sri Lanka I wanted something very different; a different cultural head space that I represented on "Journey South" by a different approach to composition. It was more psychedelic in some ways," says Ghosh.

Despite the conservatoire elegance of much of A South Asian Journey, Ghosh's source of inspiration comes very much from the folk tradition: "Folk is very central to it as opposed to classical cultures and that's always been the case in terms of what really resonates with me from South Asian music, indeed all kinds of music, whether it's the blues or gnawa or rai music," says Ghosh. "That folk sound is the blues of a culture. That's what I wanted to tap into, not necessarily the sadness of the blues, but a musical earthiness. That was central to A South Asian Suite."

Anybody coming to A Journey South expecting a veritable United Nations orchestra of Asian instruments is in for a surprise. Apart from tabla and a couple of Asian percussive instruments it's a jazz ensemble that drives Ghosh's suite: "When I first wrote it I started with a much more South Asian instrumentation like sitar and violin" says Ghosh, "but later I opted towards a more chamber jazz ensemble leaving out the tabla. So, the piece developed like that for a while."

Ghosh's debut recording, Northern Namaste featured a host of Asian instruments, but by the time Primal Odyssey came around he had stripped his ensemble down to a three-reed front line, bass and drums. Ghosh was also drawn to that more stripped down sound as the framework of A South Asian Suite began to take a hold in his mind and the violin, sitar and tabla were dropped: "My reason for that was similar to my head space when I was doing Primal Odyssey; I wanted the inherent feel of a South Asian sound without needing to push that any further through instrumentation."

However, as the piece started to get presented in new venues such as temples arts and jazz festivals Ghosh realized that something fundamental was missing—the earthiness he was looking for: "I made a conscious choice to bring the tabla back in, which was quite a big thing for me in some ways because using South Asian instrumentation was something that I had been moving away from. I went through the whole process of thinking why do I want it and what will it bring to the music?"

Once the tabla had been reinstated there was not turning back: "It really transformed the atmosphere of the whole suite," admits Ghosh. "It changed the way the piano played, it changed the way I asked people to voice things, the way we arranged the horns, the way we structured the pieces with the solos. The suite took on the South Asian folk style I was looking for."

After three years performing the music on and off Ghosh felt the time was right to record the suite. Ghosh recruited pianist Zoe Rahman and her contribution is central to the cohesion of the suite: "I asked Zoe to really strip down in terms of harmony and the beautiful thing about that is that when she opened up, revoicing my chords, adding all those beautiful notes higher up, those thick chords and clusters of sounds—which I could never have conceived—that really brought the music to life in a new way." 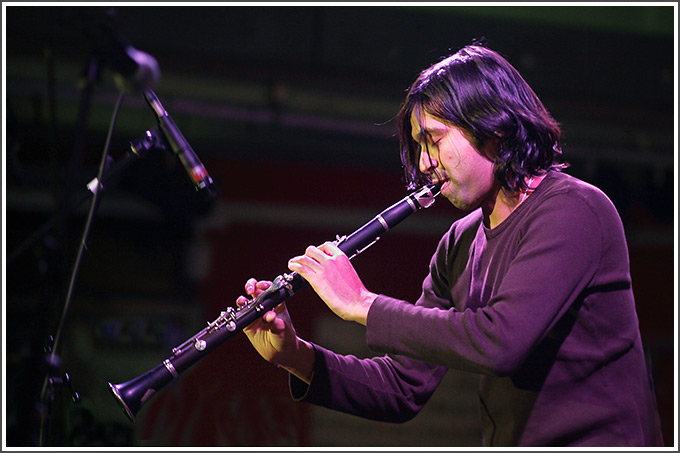 Ghosh is full of praise for Rahman: "In a similar way that [trumpeter] Miles Davis felt that Bill Evans voiced a lot of the things that he [Davis] wanted to express but couldn't because he was a single line instrument I really feel that with Zoe—the beauty of her technique, the whole sound that she creates across the instrument is breathtaking. She has tremendous left-hand power and fantastic ears that allow her to harmonize things so beautifully.

"Rhythm and melody is so central to what I do and she embodies that," Ghosh expands. "Her music really drives forward. Her solo in "River Song" is less melodic and more a rhythmic flow that incorporates arpeggios and so on. She can move from that to something so lyrical like her solo on "Gautama's Footsteps.""

On the more full-on compositions on A South Asian Journey, like "The Gypsies of Rajasthan," "Sufi Stomp" and "Journey South," it's Rahman's piano that really drives the music: "She's the real powerhouse," says Ghosh. Bass has always been so important to me but here the piano has taken over and is driving the whole thing.

"In Zoe's piano I hear the rhythm, the melody, the harmony and the texture. She plays orchestrally. She can go from that extremely powerful sound on "Sufi Stomp," that real McCoy Tyner kind of left hand that drives it rhythmically and gives the horns space to flow off, to the beautiful textures she creates on "After the Monsoon" and "Mountain Song." She paints pictures and so much of this music needs that. Zoe's a wonderful musician and so intuitive. Whatever she's playing on I think she would find herself central to it."

Rahman also proved to be a very positive presence in the studio, adds Ghosh: "I would give her a chord chart that would have a question mark under one of the chords. She just laughed and said "what is this?" I'd say, "Well I don't know what to call it because I don't really know what it is." She wasn't having that and we'd really get to the bottom of what it was I was trying to say. She was very clear in the studio when she felt things were going right and when she felt things weren't. It was a great working relationship. Live, she's been a fantastic foil for me."

A South Asian Suite clocks in at around 45 minutes, somewhat reduced form the early live performances. Ghosh describes being in his "pop head space" in the studio: "This was taking a piece that went from a live gig where there's call and response, or someone starts a melody and other people join in and you don't know where the next section is coming or whether not to move into it and so on. I wasn't having that on the studio recording. I wanted it be very guided and my writing had to have a structure that was inherent in all the parts."

The structure of A South Asian Suite took some of its inspiration from jazz's past, as Ghosh explains: "On pieces like "Gypsies of Rajasthan" and "Sufi Stomp" it was important for me to have solos but I didn't want an endless stream of solos so various melodies would interject. It was in keeping with the sort of thing I'd been hearing on [Duke Ellington's] Far East Suite (RCA, 1967) and [Miles Davis's] Sketches of Spain (Columbia, 1960) where the structures are so orchestral you are guided through by melody and riffs separated by solos. It [A South Asian Suite] could have been more expansive but I liked the precision of it," says Ghosh. "I think we really nailed it in the studio."

The long form of A South Asian Suite allowed Ghosh to explore new compositional techniques: "The suite gave me the opportunity to do something I've never really done on record before, which was to do those Indian alap-style intros where you move from one piece to another by almost evoking what you are about to play. The segues connect pieces but also give listeners a bit of breathing space and move you from the delicacy of "River Song" to "Sufi Stomp," so going from Bangladesh to Pakistan, from rivers and fishermen and a naturalistic spirituality to something that's much more devotional and rhythm and chants based. We needed to lead people that way and that's where the segues come in."

Form and structure are key components of A South Asian Suite but so too is the spirit of freedom that pervades the suite: "Improvisation is central to what we do," says Ghosh, "for the lyricism it brings and for the energy it injects into a piece. It's not the [saxophonists] Sonny Rollins or the John Coltrane approach where you play and become more and more expansive. People had a set amount of time to play, two choruses then bang we're moving on. I love the fact that everyone has a limited amount of time to say everything they want to say and take it to the next place."