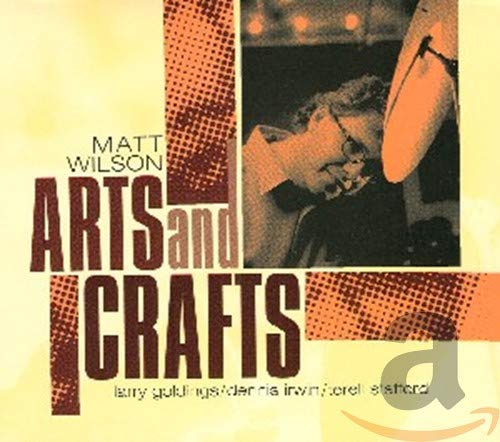 Ever the restless spirit, Matt Wilson tries something entirely new for his fourth Palmetto CD. Sending the members of his regular Matt Wilson Quartet on a brief vacation, the drummer recruits Terell Stafford on trumpet, Larry Goldings on piano (not organ), and Dennis Irwin on bass for a new band he calls Arts and Crafts. Previous efforts with the MWQ and with Dewey Redman have gained Wilson a left-of-center reputation, but on this album Wilson confounds expectations altogether. He begins with Rahsaan Roland Kirk’s "Stompin’ Grounds," a no-nonsense ride through "Stomping at the Savoy" changes. Two tracks later, the band runs down Bud Powell’s "Webb City." Packing an enormous punch without exceeding four minutes, the performance recalls the concise fury of the earliest bebop sides. In a similarly guileless fashion, the group plays a snappy waltz version of George Gershwin’s "Love Walked In." Irwin is featured front and center on Hal Hopper’s "There’s No You," and Stafford warmly caresses the bossa nova melody of Nelson Cavaquinho’s "Beija Flor."

Wilson’s originals are more adventurous — more typically Wilsonian, if you will — but they don’t contradict the spirit in which the cover tunes are offered. "Lester," written in honor of the late Lester Bowie, opens with Stafford in wah-wah mode against the unison backdrop of Irwin’s bass, then develops into a slow doo-wop blues as the trumpeter gets increasingly aggressive and stunning. "Final Answer" is a diatonic free-bop theme that features Goldings going fairly "outside," something he doesn’t do that often. And the title track is a slow groove that again finds Goldings reaching, in subtle but marked contrast to the superb bop playing he does elsewhere on the disc. Indeed, Goldings’s presence is one of the album’s biggest pluses, not least because the organist’s outings on acoustic piano are so rare.

Arts and Crafts also puts a boogaloo spin on Ornette Coleman’s "Old Gospel" and wraps up with a soothing, simple arrangement of the folk melody "All Through the Night." On balance, it could be called Wilson’s most straight-ahead record yet, but it’s clearly not Wilson’s intention to fit neatly into any category. Better just to think of it as Matt Wilson music.