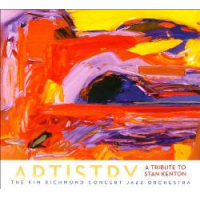 "A Tribute to the Music of ..." That's a phrase encountered regularly when one surveys today's recorded efforts—jazz and otherwise. A number of factors might be the motivation: there's a tremendous legacy of 20th century music (and legacy is usually bankable), or, perhaps, there isn't enough bankable current music. Either way, looking in the rearview mirror isn't too bad an idea.

With Artistrythe tribute is to one of the most innovative bandleaders in jazz, Stan Kenton. However, while that's certainly noteworthy (especially coming off the recent Kenton centennial), there's much more here than memories. Augmenting the traditional big-band structure (and a great one at that) with orchestral instruments and providing same with creatively written and terrifically performed charts, saxophonist Kim Richmond and group deliver an outstanding performance.

As might be expected when the music is Kenton-inspired, there's plenty of screaming high and ballsy low brass here—and those sections and the entire orchestra play with vigor. Richmond's innovative writing is intelligent and thought-provoking as it breaks expected molds and leverages the orchestral element—and the band's significant musicianship—superbly. He also demonstrates a delicate balance among outstanding ensemble playing, complex melodic and rhythmic development and straight-ahead improvisation.

The selections incorporate the obligatory Kenton classics ("Artistry in Rhythm," "The Peanut Vendor") all reworked creatively and performed so well that they set a new bar. Richmond's neat originals ("Horizon Under," "Anchor of Hope" and the gorgeous send- off, "Poetry") get the same fine treatment, as do a handful of classics ("Over the Rainbow," and Richmond's alto feature, "Willow Weep for Me") and tunes from well- known writers. Irrespective of source, the performance shines in every regard.

Stan Kenton was quite adamant about forbidding the resurrection of any "ghost" band after his passing. There is a fine band of Kenton alumni whom former Kenton trumpet star Mike Vax pulls together for a brief annual tour, but that's about it. So, the perfect solution to saluting the Kenton legacy without "ghosting" him certainly rests here. It's a fine tribute to past and present. Artistry? Most appropriately.