By GLENN ASTARITA
March 5, 2010
Sign in to view read count 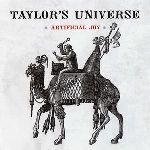 Danish composer and multi-instrumentalist Robin Taylor is one of the hardest working progressive rockers in the business. Based on the strength of his rapidly growing discography and forthright intentions, his Taylor's Universe band features some longtime collaborators, despite occasional personnel shifts. Artificial Joy remains consistent with his penchant for imbuing knotty deviations on top of burgeoning pulses, such as the resonating "Work," that resembles the massive keys-sax assault, executed by prog favorite Van Der Graaf Generator.

Taylor's music gushes forth with exultant themes, accelerated by massive backbeats, thick keyboard treatments and climatic storylines. Reedmen Jakob Mygind and Carsten Sindvald shade the program with blustery solos, where the band fuses classic 1970s prog with a nouveau uplift. Taylor, unlike many others, doesn't abuse the 80-minute data space contained within the CD format; his albums generally hover within the 40-minute range standardized during the vinyl era, minimizing filler material.

With howling blitzkriegs tempered by harmonious hooks and riffs, Taylor generates an expansive framework via his dense and multihued keyboard voicings. On "Laughter," he commences with a bell-tone electric piano ostinato along with dreamy sax parts, directing the musicians toward both a steady blues motif and Louise Nipper's tongue-in-cheek vocals. They close it out, on "Fame," with an ominously arranged ascension not unlike climbing a staircase. Enjoyable and not overwrought, Taylor acutely blends hid technically minded musicianship values with an entertaining outlook on this persuasive studio date.