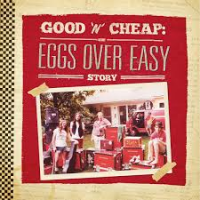 Because the pub-rock moment of the Seventies was essentially relegated to the British Isles and had no corollary in America, it remains a one-line footnote in the chronicles of contemporary rock. Yet as with so many (self-)limited niches of style, its proponents are as fervently devoted as its practitioners like Ducks Deluxe, Brinsley Schwarz and Dr. Feelgood. Yet history as documented on this 2CD package, will show it was, in fact, United States natives Eggs Over Easy who (re)ignited devotion ...