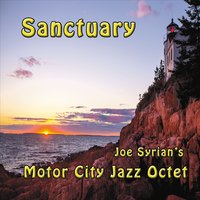 The Motor City Jazz Octet numbers in its ranks thirty or more of the Detroit metropolitan area's most accomplished musicians, eight of whom actually perform together at any given moment. Because of that, and some other quirks, the octet's debut album, Sanctuary, is in some respects a study in confusion. A press release accompanying the album, which was recorded in May 2013, names three guest artists--organist Jimmy Smith, guitarist George Benson, tenor saxophonist Rick Margitza--none of whom appears on the ...