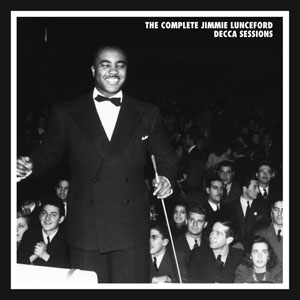 Jimmie Lunceford The Complete Jimmie Lunceford Decca Sessions Mosaic Records 2011 When saxophonist Jimmie Lunceford signed to the Decca label in 1934 he was running one of the best orchestras in the US. He had signed a deal to appear at the Cotton Club (where bandleaders Duke Ellington and Cab Calloway had recently launched into stardom) and was frequently beating others in battles of the bands, all the while leading an outfit with an ...

Jimmie Lunceford and His Orchestra: 1943-45 Broadcasts

Somewhere between the enduring Swing Era “superstars” (Ellington, Basie, Miller, the Dorsey brothers, Harry James, Artie Shaw) and the scarcely remembered “regional bands” stood such enormously popular (and talented) but relatively short–lived “second tier” orchestras as those led by Fletcher Henderson, Don Redman, Chick Webb, Andy Kirk, Jay McShann, Jimmie Lunceford and others. Lunceford’s ensemble was at its peak in the mid– to late–’30s before the great arranger Sy Oliver left to join the Tommy Dorsey Orchestra. These performances, taped ...