A Remembrance of Percy Heath

This article was originally published at All About Jazz in May 2005. Percy Heath could play the hell out of that big contrabass. Played it for more than half a century. With Bird and Miles and Diz and 'Trane and Brownie and the venerable Modern Jazz Quartet and on and on. And if you're reading this you know that already, probably. He played in dumps; he played R&B. Played for next to nothing. But he also ...

As remarkable as it may seem that this Love Song is the debut release as a leader by 80 year-old elder statesman bassman Percy Heath, it was certainly well worth the wait. Heath, who has been the quintessential supportive sideman on more than 300 recordings, most notably as a member of the Modern Jazz Quartet, steps into the spotlight here, ably assisted by his regular rhythm section mates from the Heath Brothers band, pianist Jeb Patton and drummer, brother Albert ... 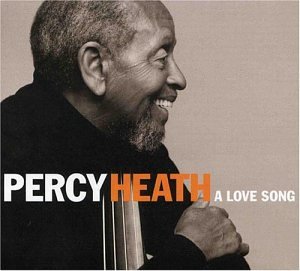 Being a little late to hop on the bandwagon about last month's release of this first album from Percy Heath, I would like to avoid giving you more of the plaudits of Heath's magnificent career and accomplishments that you've already read, and simply offer my congratulations upon this effort.

The music on A Love Song can stand by itself. Heath has contributed four of the seven tracks, with one from the late Roland Hanna, one from John Lewis, ...

What would life be without its little surprises? Did bassist Percy Heath ever conceive the notion that he would get his first recording as leader 50 years into his career? Ah, the vagaries of fate! But this is a moment to savour and to enjoy. Heath got to choose the songs, and the band at hand has an uncanny understanding. The music is sublime; there is no over heated ardour at work, just a quiet fire which kindles the flame ...

It’s an encouraging sign for all octogenarians when one of their own, a man who has a musical career that spans more than six decades, finally releases an album under his own name at the age of eighty. That man is Percy Heath, and with A Love Song he finally gets to play things exactly as he hears them, which is with a quartet alongside another bassist, allowing Heath plenty of room to solo, on both bass and cello.

On the photos included with A Love Song, Percy Heath shows off the greatest grin in jazz since Louis Armstrong. And he has good reason to flash that smile; at eighty years young, he's just issued his first recording as a leader (can that be true, after fifty plus years in the business?), where he displays his transcendent gifts as a bass and cello player and tunesmith on a simply beautiful quartet outing.Percy Heath is the eldest of ...

This 80 year old bassist from one of the great jazz families, the Heaths, has finally recorded his first session as a leader, and it is a touchingly atmospheric affair. Only one really catchy melody graces the album, “Django," from Percy Heath's Modern Jazz Quartet days of a half century ago, but this album is less about tunes with hooks than about establishing a graceful air, tunes blending into one long session of delicate jazz impressionism.