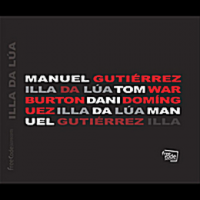 Manuel Gutierrez has built up a sizeable discography, but he's not previously released an album under his own name. Illa Da Lua is his debut as leader, but it's worth noting that the cover gives equal prominence to his rhythm section partners, bassist Tom Warburton and drummer Dani Dominguez. It's a fair share of the credits, for while Gutierrez wrote all of the tunes, this is very much a collaborative recording.The 40 year old Spanish pianist has long ...