Of all the collaborations in the later years of legendary reedman John Tchicai, some of the most fertile were in the company of guitarist Garrison Fewell, whether under the Dane's leadership like One Long Minute (NuBop, 2012) and Big Chief Dreaming (Soul Note, 2005) or in undocumented appearances with the guitarist's Variable Density Sound Orchestra. Joining the pair on Good Night Songs (Boxholder, 2006), Boston-based saxophonist Charlie Kohlhase completed a formidable unit. For the week long engagement at New York's ...

Late saxophonist John Tchicai's roots and influences emanated with the 1960s innovative free-jazz ensemble, The New York Art Quartet. He became a significant global artist in all things considered to be cutting-edge within the ever-expansive jazz vernacular. This 2007 concert, recorded at the New York City venue Birdland, features compositions by guitarist Garrison Fewell and one track written by Tchicai. Ultimately, the album is unique from a perspective that includes sojourns into the avant jazz space, while containing memorably melodic ...

John Tchicai / John Edwards / Tony Marsh Cafe Oto London August 24, 2009Having played with John Coltrane on his groundbreaking Ascension (Impulse, 1965), it was no surprise that Danish reedman John Tchicai attracted a large crowd on one of his infrequent London appearances at Dalston's Cafe Oto.

What was more of a surprise was the predominantly young audience, none of whom would have been born when Tchicai first made waves ...

This isn't so much a meeting of minds as it is a meeting of generations; each individual intent on serving the perpetually slippery thing that is The Music. John Tchicai is the individual with the greatest heritage here, and the idea of him coming together with Hans Joachim Irmler of the sonic explorers Faust will always be an intriguing one. Here it yields inscrutable results, the whole musical whole far greater than the sum total of its parts. 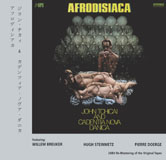 A minor classic so unknown that, until this 2008 reissue, it wasn't even listed at All Music Guide, Danish-born of Congolese-descent saxophonist John Tchicai's 1969 MPS release Afrodisiaca is a sprawling, multi-disciplinary work that rivals better known works like John Coltrane's Ascension (Impulse!, 1965). No less a personal journey, Afrodisiaca stands, nearly forty years later, as a masterpiece that blends Afro-rhythms and harmonic conceits with improvisation of the freest kind, near-classical microtonalism and innovative sonic experimentation. Its reach as an ...

The Danish-American saxophonist John Tchicai, now resident in France, should need no introduction. He began building his reputation forty years ago on John Coltrane's Ascension (Impulse!, 1965), and even now, at over seventy years old, he's still going strong.

On two fine new releases--Witch's Scream, recorded in New York in September 2004, and Good Night Songs, recorded in Amherst in December 2003--Tchicai proves himself still to be a compelling and spirited player, gifted with a sense of humor and drama, ...